WWE News: From Roman Reigns Flaunting Fit Physique, Kairi Sane Leaving Raw to Brock Lesnar Not Making a Return at SummerSlam 2020, Here Are 5 Interesting Updates to Watch Out For 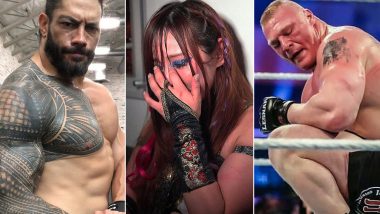 WWE is leaving no stone unturned to come up with different story ideas and matches for its viewers. We just witnessed 'Horror Show at Extreme Rules' this past Sunday on July 19, 2020, which was packed with some amazing matches. This was followed by an extravagant episode of Monday Night Raw. In this article, we bring to you five big news from WWE which include Roman Reigns displaying his massive physique, Kairi Sane last appearance on Monday Night Raw, Brock Lesnar not making a return at SummerSlam 2020 and many more. WWE Raw July 20, 2020 Results and Highlights: Randy Orton Defeats Big Show; Stephanie McMahon Announces Extreme Rules Women’s Title Rematch Between Asuka & Sasha Banks (View Pics)

Before we move on to the main news, let's brief our readers about the current champions in WWE. Drew McIntyre after successfully defending his WWE title at Extreme Rules 2020, has yet again received a challenge from Heel Ziggler for the rematch. Sasha Banks with aid from Bayley stole away the Raw Women's title at Extreme Rules from Asuka. However, Stephanie McMahon cleared that Sasha Banks has not won the match and the rematch will take place in the upcoming episode of Raw on July 27, 2020. Seth Rollins after brutally injuring Rey Mysterio went on to injure Aleister Black this past week on Raw. Now let us take a look at five big news from WWE. Rey Mysterio's Eye Pops Out During Extreme Rules 2020 'Eye For an Eye' Match, Seth Rollins Vomits at Ringside (Watch Video)

The Big Dog is away from in-ring action these days, however, he is training vigorously at home to get into the best shape of his life. In his recent Instagram post, Roman Reigns looks in good muscular shape. The Big Dog is indeed in the best shape of his life and fans are eagerly waiting for him to return soon. Roman Reigns was recently blessed with twins and in order to take care of his family during this coronavirus time, he has taken a break from WWE. The Big Dog was replaced by Braun Strowman to face Goldberg at WrestleMania 36 for Universal Championship.

Shoulders week 1 #Y3T. Seated Side Laterals, Rep range 12-16. Definitely getting stronger and building muscle but not quite where I want to be. The grind continues as I follow this fitness Journey/Lifestyle. Hope this finds everyone well and in good health. Shout out to Coach @neil_yoda_hill1 , wishing u a speedy recovery my friend! Stay safe and God bless! 🤙🏽.

Yes, you heard it right Asuka's friend and the member of Kabuki Warrior will be leaving Raw on good terms. Kairi Sane delivered fans with an electrifying last match on Monday Night Raw this week, where she defeated Bayley. The Pirate Princess got married last year and now she wants to fly back to Japan and spend time with her husband. Sane will still be affiliated with WWE and the company will always keep the door open for her return. Let us take a look at Kairi Sane's emotional picture from this past week episode of Raw.

3. Brock Lesnar Not to Return at SummerSlam 2020

There were rumours of Brock Lesnar making an appearance at Extreme Rules 2020 to challenge Drew McIntyre for the title match, however, it did not happen. Also, fans expected Lesnar to appear this past week on Raw and attack the WWE Champion. However, wrestling expert Dave Meltzer, made it clear that Brock Lesnar will not be at WWE SummerSlam 2020. Dave Meltzer also claimed that Brock Lesnar’s current hiatus is expected to be a lengthy one.

4. AJ Styles Reveals His List For 'Mount Rushmore of Wrestling'

AJ Styles is indeed having a great time in WWE, the Phenomenal One has also been considered the greatest wrestler of all time by Stone Cold Steve Austin. AJ Styles in an interview with The Sun revealed his list for 'Mount Rushmore of Wrestling'. This list include four wrestlers who have created who have had the biggest impact on the industry. The Intercontinental Champion felt that 16 time World Champion Ric Flair, 3749 days NWA World Heavyweight Champion Lou Thesz, Andre The Giant and Hulk Hogan should be included in 'Mount Rushmore of Wrestling'

5. Braun Strowman to Get a New Gimmick

There is speculation that Braun Strowman might make a return to SmackDown as an evolved version of himself. This will be similar to how Bray Wyatt made a comeback as 'The Fiend'. Former WWE referee and veteran Jimmy Korderas stated this to WrestlingInc while speaking about Braun Strowman future in WWE. Braun Strowman was drowned in water by Bray Wyatt in the Wyatt Swamp Fight which took place at Extreme Rules 2020. Although, Strowman is still the Universal Champion as Wyatt Swamp Fight was a non-title match.

(The above story first appeared on LatestLY on Jul 23, 2020 09:01 AM IST. For more news and updates on politics, world, sports, entertainment and lifestyle, log on to our website latestly.com).