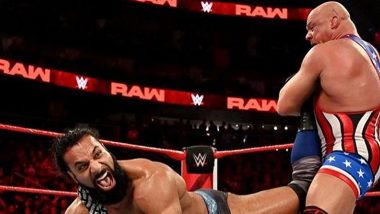 Coronavirus pandemic situation has taken a toll on sports and entertainment heavily. Like other sports body, WWE has also incurred huge loses due to COVID-19 outbreak. In order to cut their budget, WWE has released many wrestlers which include big names like Kurt Angle, Rusev, Karl Anderson, Luke Gallows and many more. WWE made the official announcement on their official Twitter handle on April 15, 2020. The Olympic Gold medalist Kurt Angle took this thing positively and expressed thanks to WWE for their support. WWE Raw April 13, 2020 Results and Highlights: Seth Rollins Stomps Drew McIntyre; Monday Night Messiah Eyes on World Championship Title (View Pics)

Kurt Angle was last seen in action against Baron Corbin at WrestleMania 35 which took place last year at MetLife Stadium. The six-time WWE Champion also contributed a lot in backstage operations of WWE. Speaking about Rusev, he was recently involved in a feud with Bobby Lashley, where according to the storyline, Lana ditched him and went along with The Almighty. While Luke Gallows and Karl Anderson were a member of the famous faction The OC led by AJ Styles. Gallows and Anderson were also seen during Boneyard match between The Undertaker and AJ Styles. Now let us see below the list of WWE players released and also Kurt Angle's reaction to it. WWE Deemed Essential Business Amid COVID-19 Crisis.

I wanted 2 say thank you to the WWE for the time I spent there.I made many new friends and had the opportunity to work with so many talented people. To the Superstars, continue to entertain the WWE Universe as well as you possibly can. They’re the best fans in the world. #itstrue

As per PWInsider.com, the WWE chairman said the company would also be cutting back on pay for board members and executives, in a short meeting. WWE has also received an essential business status to run shows behind closed gates at their Performance Center in Orlando, Florida. Recently, WWE also showcased their flagship event WrestleMania 36 from Orlando, Florida on April 4  and 5, 2020.

(The above story first appeared on LatestLY on Apr 16, 2020 11:44 AM IST. For more news and updates on politics, world, sports, entertainment and lifestyle, log on to our website latestly.com).