The US-based tech giant Apple is reportedly working on a new iMac with M3 chipset which could potentially launch next year, the media reported. 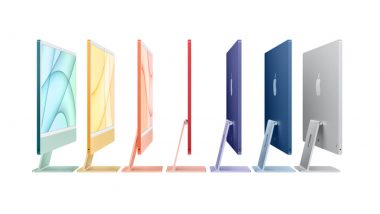 San Francisco: The US-based tech giant Apple is reportedly working on a new iMac with M3 chipset which could potentially launch next year, the media reported. An M3 chip is "already in the works" and is currently undergoing testing, reports AppleInsider, quoting Mark Gurman from Bloomberg. The report did not reveal the details of what the chip will offer but it won't launch until the end of next year at the earliest. Apple’s MagSafe Battery Pack Firmware Update Can Now Charge iPhones Faster: Report.

As for the M2 roadmap, the report outlined the plan as an M2 release in a new MacBook Air, entry-level MacBook Pro and Mac mini. Earlier this year, reports surfaced that Apple was planning to launch the new 27-inch iMac Pro in June this year.

The upcoming iMac Pro will feature mini-LED technology and ProMotion features. The base model of the iMac Pro will feature 16GB of RAM and 512GB of storage, which can be upgraded to a much more capable configuration. The company is now focusing on MacBooks and is allegedly exploring the possibility of offering an all-screen foldable notebook. The company is currently in discussion with suppliers for around 20-inch foldable screen. Apple is set to launch several new products this year, including the Apple iPhone 14 series, MacBooks powered by the M2 chipset and a 27-inch iMac Pro with M1 Pro or M1 Max processor.

(The above story first appeared on LatestLY on Apr 25, 2022 12:48 PM IST. For more news and updates on politics, world, sports, entertainment and lifestyle, log on to our website latestly.com).