Tech giant Apple has released a new firmware update that will allow MagSafe Battery Pack to recharge iPhones a little faster that before. 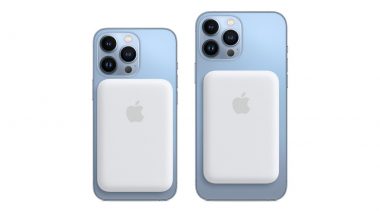 San Francisco: Tech giant Apple has released a new firmware update that will allow MagSafe Battery Pack to recharge iPhones a little faster that before. Earlier when users plugged into a 20W charger, the MagSafe pack could transfer up to a 15W charge to an iPhone. According to GSM Arena, the MagSafe Battery Pack will be capable of charging up to 7.5W while off the power grid. Apple Likely To Unveil Its First Full-Screen iPhone in 2024: Report.

Previously, it only charged at up to 5W while portable. The tech giant has updated all the details on its support page about how users can update their MagSafe Battery Pack. Now users can use their iPhone, iPad, or a Mac to update the Pack, according to the report that came out late on Wednesday.

The battery pack will automatically update while it is attached to the device -- though this could take up to a week. Users can connect the MagSafe Battery Pack to an iPad or Mac and the update should take about 5 minutes. Apple is also planning to unveil its first full-screen iPhone in 2024 and may house an under-display front camera with it, popular analyst Ming Chi Kuo has revealed on Twitter.

(The above story first appeared on LatestLY on Apr 21, 2022 04:57 PM IST. For more news and updates on politics, world, sports, entertainment and lifestyle, log on to our website latestly.com).