Cupertino-based tech giant Apple is reportedly planning to launch iPad Pro with the rumoured M2 chip sometime between September and November of this year. 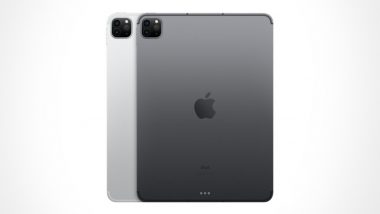 San Francisco: Cupertino-based tech giant Apple is reportedly planning to launch iPad Pro with the rumoured M2 chip sometime between September and November of this year. According to Apple tracker Mark Gurman's Power On newsletter, Apple did not launch new iPad Pros this month at its "Peek Performance" event, it is reasonable to now expect new models to arrive between September and November this year. Apple Could Reportedly Skip iPad Pro 11-Inch With Mini LED Display This Year.

The upcoming iPad Pro, coming with 11-inch and 12.9-inch display versions, will be among the range of devices that Apple plans to launch later this fall. The iPhone maker is experimenting with at least one 2022 iPad Pro prototype with MagSafe on board.

The Cupertino-based tech giant will keep the metal back and will add a large glass Apple logo. The Apple logo made of glass would be the exact point to charge with the MagSafe wireless charging.

Meanwhile, driven by strong 5G upgrades for the iPhone 12 and iPhone 13 series, Apple reached the 60 per cent sales share mark globally last year -- for the first time since 2017. The delayed launch of Apple devices in 2020 also pushed demand to 2021. Apple, with its strong brand power, is in the best position to gain Huawei's premium smartphone users, says a new report by Counterpoint Research.

(The above story first appeared on LatestLY on Mar 28, 2022 10:04 AM IST. For more news and updates on politics, world, sports, entertainment and lifestyle, log on to our website latestly.com).