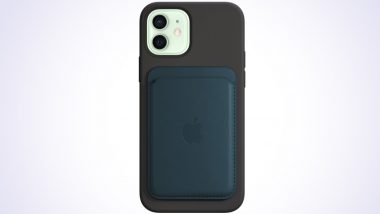 A US Federal Communications Commission (FCC) filing published after the iPhone 12 series debuted last year revealed Apple's MagSafe protocol supports bilateral charging, reports AppleInsider. MagSafe is a new feature on all iPhone 12 models that allows for magnetic accessories to be attached to the back of the devices, including Apple's MagSafe Charger for more precise wireless charging.

Apple's work on ?iPhone 12? MagSafe battery packs became apparent in mid-February after the launch of the second iOS 14.5 beta. There was a mention of a mysterious "battery pack" discovered in the code. The MagSafe battery pack would reportedly only provide additional charge, and not include a full protective case like previous iPhone battery add-ons.

(The above story first appeared on LatestLY on Mar 02, 2021 12:58 PM IST. For more news and updates on politics, world, sports, entertainment and lifestyle, log on to our website latestly.com).