Apple is expected to announce the iPhone 14 series in or around September and now a new report suggests that all four iPhone 14 models would sport 120 Hz screens, not just the two Pro devices. 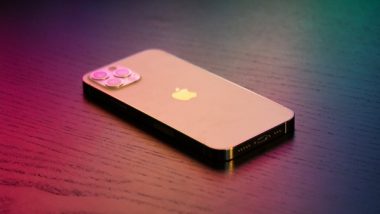 San Francisco, January 15: Apple is expected to announce the iPhone 14 series in or around September and now a new report suggests that all four iPhone 14 models would sport 120 Hz screens, not just the two Pro devices.

According to a research note by analyst Jeff Pu for Haitong International Securities, all four iPhone 14 models will also have the exact same RAM amount: 6GB. This too is in contrast to the current situation, where the iPhone 13 mini and iPhone 13 have 4GB, while the Pro and Pro Max have 6GB, reports GSMArena. Apple iPhone 14 Pro Models Likely To Feature Punch-Hole Display: Report.

Recently, Apple analyst Ming-Chi Kuo also claimed that the 2022 iPhone 14 Pro and 14 Pro Max would be shifting over to a hole-punch cutout for the camera. Apple has reportedly advised major US carriers to prepare for the launch of eSIM-only smartphones by September this year.

It is possible that Apple might remove the physical SIM card slot starting with some iPhone 14 models, rather than some iPhone 15 models as originally rumoured. It is also said that there will be support for two eSIM cards, ensuring dual SIM functionality. The removal of the SIM card slot could further improve water resistance.

The next flagship series, the iPhone 14 line-up, will come with up to 2 TB of storage. Apple will adopt QLC flash storage for next year's iPhone and that, thanks to the newer storage technology, it will increase capacity to 2 TB.

(The above story first appeared on LatestLY on Jan 15, 2022 09:33 PM IST. For more news and updates on politics, world, sports, entertainment and lifestyle, log on to our website latestly.com).