Apple May Add Gaming-Centric Displays to Its 2020 Line-Up of iPhones: Report 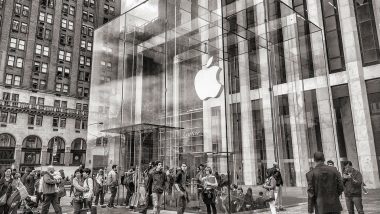 San Francisco, July 22: To make its devices more gaming-centric, Apple may add quick and ultra-smooth displays to its 2020 line-up of iPhones, for which the company is currently in discussion with Samsung and LG. Both LG and Samsung are known to be the two biggest suppliers of smartphone AMOLED displays in the world. "Apple is considering a switchable 60Hz/120Hz refresh rate screen on the iPhone in 2020, and is discussing with Samsung and LG," a reliable Apple tipster, Ice Universe, tweeted on Sunday.

By "switchable 60Hz/120Hz", it is presumed that next year's iPhones would be able to switch to a 60Hz refresh rate whenever static images are displayed in order to conserve battery, Tech Radar reported. If true, this would not be the first time that the iPhone-maker would be releasing mobile devices with 120Hz displays. Apple iPhone 11 Max Images Leaked Online Revealing Triple Rear Camera & Narrow Display Notch: View Pics.

More details about the screen technology Apple plans on using for its 2020 iPhones remain undisclosed as of now. Next year, the company is expected to launch four devices with 5G compatibility and advanced 3D sensing camera technology.

The new line-up would help the company sell 195 million units in 2020, up from an estimated 180 million in 2019, the media has reported. Currently, Apple is preparing for the launch of this year's iPhone 11 handsets in September.

(The above story first appeared on LatestLY on Jul 22, 2019 02:07 PM IST. For more news and updates on politics, world, sports, entertainment and lifestyle, log on to our website latestly.com).