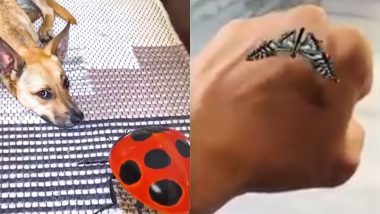 After Google launched 3D animals feature which garnered a lot of fans during the lockdown, now is the time for insects. An array of animals including lion, tiger, panda, bear, and birds had garnered the interest of social media users some months ago. And keeping the interest of people, now people are inviting insects to their home. With the feature, you can view insects in 3D as if they were sitting on your sofa. Google India tweeted pictures of lady beetle and bugs with the caption, "You can now see the creepy crawlies come to life on your screen. Search for any AR insect and select 'View in 3D'." There are 23 insects you can view through this feature. Google 3D Animals: View Giant Panda, Lion, Bear To Penguin in 3D; Twitterati Spends Quality Time With Kids During Lockdown.

Search for any AR insect and select “View in 3D” 🔍 pic.twitter.com/F7OdTkg1uo

HAHAH, Watch This One!

Crawl, jump or buzz around your house with some amazing arthropods. Now you can examine 23 different insects in your space with AR. Just use your phone to search for an insect (like “ladybug”) and tap the “View in 3D” button. #Google3D 🐞 pic.twitter.com/8JEUm2Gcye

🐞🦗We’ve launched AR insects on Google Search. For digital insect collecting, search for the name of the insect using a mobile device and tap “View in 3D” pic.twitter.com/ye6VXQeCIx

You can find all these insects in the Google search box. To use the feature, you have to Google the name of the insect, for example: 'Hornet'. You will see a box which says, 'Meet a life-sized hornet up close'.It will be followed by an option which reads 'view in 3D' button', and proceeds to 'view in your space'.Then, you will see a life-size image of a hornet in your surrounding. Remember, you will have to give Google access to your camera and also your device will need to be AR-enabled. For Android users, Google requires an operating system of Android 7.0 or later. iPhone users need to be running iOS 11.0 or later.

(The above story first appeared on LatestLY on Sep 22, 2020 05:17 PM IST. For more news and updates on politics, world, sports, entertainment and lifestyle, log on to our website latestly.com).