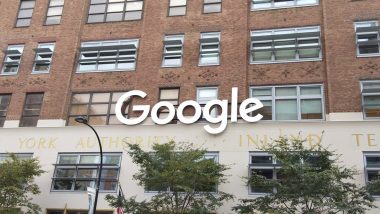 San Francisco, July 2: Google has confirmed that its 'Nearby Sharing' feature is coming soon and is rolling out to some beta users on Android. The search engine giant is running a limited beta test of ‘Nearby Sharing' with select Android users, but the test field is very small, reports Android Police. The feature will allow users to share files between Android devices quickly, easily, and wirelessly, has been compared to Apple's AirDrop. Gboard Introduces &#8216;Smart Compose&#8217; to Google Messages for Android Beta.

To get the feature, one needs to sign up to be a beta tester for Google Play Services. A user can do that by simply visiting the Play Store listing and opting into the beta. After that, one will need to wait for a bit until an update appears. After installing beta one will see "Nearby Share" in the share sheet when sharing from apps.

A user can share files such as photos and videos, links, and other stuff as well. When a device nearby wants to share with the user, a notification will appear and one can tap it to make the device visible.

(The above story first appeared on LatestLY on Jul 02, 2020 11:55 AM IST. For more news and updates on politics, world, sports, entertainment and lifestyle, log on to our website latestly.com).