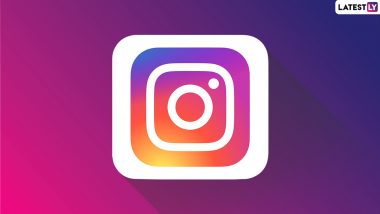 San Francisco: After workers accused the company of censoring pro-Palestine content, Facebook-owned Instagram has tweaked its algorithms that will begin ranking original and re-shared content equally. The employees at Instagram made numerous appeals about content that had been censored by automated moderation, reports The Verge. Instagram Rolls Out New Insight Data for Live Videos & Reels on iOS Platform.

"Our policies are designed to give everyone a voice while keeping them safe on our apps, and we apply these policies equally, regardless of who is posting or their personal beliefs," a Facebook spokesperson had said in a statement. "We have a dedicated team, which includes Arabic and Hebrew speakers, closely monitoring the situation on the ground, who are focused on making sure we're removing harmful content, while addressing any enforcement errors as quickly as possible," the company spokesperson was quoted as saying.

Last week, pro-Palestine activists hit Facebook with a coordinated campaign where they have been successful in pushing down the app review rating of the social networking platform on both Apple and Google app stores. The average star rating for the social network was down from over 4 out of 5 to 2.3 out of 5 on Apple's App Store and 2.4 out of 5 on the Google Play after receiving thousands of one-star reviews.

(The above story first appeared on LatestLY on May 31, 2021 03:42 PM IST. For more news and updates on politics, world, sports, entertainment and lifestyle, log on to our website latestly.com).