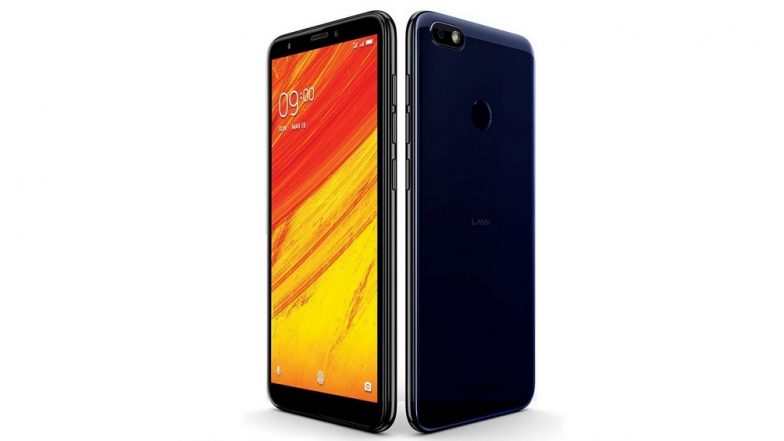 LAVA International Limited, an Indian smartphone maker has officially announced price cut for its popular smartphone - Z91, which now starts at Rs 7999. Fitted with face unlock feature, the company claims that the smartphone is capable of recognizing the users' face within 0.7 seconds. The dual-SIM Lava Z91 smartphone comes with 5.7-inch HD+ display with 18:9 widescreen resolution and 2.5D curved body design. Other highlights of the smartphone are fingerprint sensor and 3GB of RAM. Google Officially Introduces New Shopping Search Features With Filters for Indian Users - Report.

On this occasion, Tejinder Singh, Head- Product, Lava International Limited said, “We are super excited to announce that the Lava Z91 will now be available at a very competitive price of Rs. 7,999. We always strive to provide valuable and innovative technologies at pocket-friendly prices to our consumers and the new price of Z91 is a perfect example of this. Z91 is an amalgamation of latest technology and beautiful design, aimed at meeting all the needs of consumers and providing them with the best user experience. The face recognition feature, full screen display, and exceptional good looks are the USPs of the product and this affordable price will make the Z91 stand apart in its segment.” OnePlus 6T McLaren Edition Flagship Smartphone Launched in India at Rs 50,999; Online Sale Starts on December 15.

Equipped with scratch resistant screen, the Lava Z91 is one of the powerful devices currently on offer in the market. Backed by 3000 mAh battery, the smartphone is claimed to provide 24 hours of backup through a single charge. Google Year in Search 2018: Fortnite, Red Dead Redemption, Fallout 76 &  God of War in Top 5 Video Games in Google Zeitgeist List.

Under the hood, the smartphone comes with a Mediatek Processor that is clubbed with 3GB of RAM and 32GB of internal memory which can expanded up to 128 GB. For photography, the device comes with a 13MP rear camera with LED flash for sharp and crisp images. At the front, the smartphone packs an 8MP sensor for selfies and video calling. The company is also offering the smartphone with special offer of free one-time screen replacement worth of Rs 2500, in case the user breaks screen within one year of purchase.