Microsoft-owned LinkedIn, the American business and employment-oriented online service has reportedly suffered a second massive data breach in 2021. The company stated that the data which was being put up for sale was scraped. 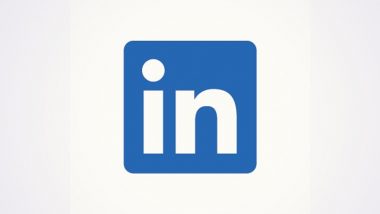 Microsoft-owned LinkedIn, the American business and employment-oriented online service has reportedly suffered a second massive data breach in 2021. Details like physical addresses, geolocation records as well as salaries of the users have been reportedly leaked via this data breach. These details were available for sale on the dark web. LinkedIn Reportedly Working on Clubhouse-Like Audio Networking Feature.

This came into light after a popular hacker had posted an online sale advertisement for the data of 700 million LinkedIn users. As per a recent report, the data advertised by the hacker is genuine and up-to-date with data points from 2020 to 2021. It's also reported that the leaked data of the users contain full names, email addresses and phone numbers. Other leaked data information includes profile URL, username, professional background, social media accounts and usernames.

Though no passwords have been leaked, this data breach is a significant one and could be used further for online frauds. However, LinkedIn has denied reports of a data breach. The company stated that the data which was being put up for sale was scraped. According to the company, its team has investigated the issue and clarified that there is no data breach and no private information of LinkedIn users was compromised.

(The above story first appeared on LatestLY on Jun 30, 2021 12:53 PM IST. For more news and updates on politics, world, sports, entertainment and lifestyle, log on to our website latestly.com).