Microsoft To Bring Its Xbox Gaming to Web-Connected TVs

Microsoft has announced it is working with global TV manufacturers to embed the Xbox experience directly into internet-connected televisions with no extra hardware required except a controller. 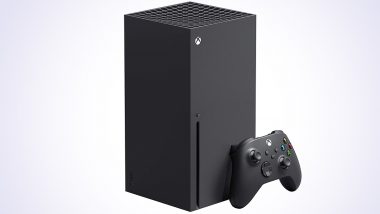 New Delhi: Microsoft has announced it is working with global TV manufacturers to embed the Xbox experience directly into internet-connected televisions with no extra hardware required except a controller. The tech giant will bring its Xbox Game Pass service to TVs through its xCloud streaming technology. Microsoft Discontinues Support for Original Edge Browser: Report.

"Xbox is exploring new subscription offerings for Xbox Game Pass so more players around the world can experience the most immersive and fun games across devices, geographies, and financial realities," Microsoft said on Thursday. "We're in the final stages of updating our Microsoft data centres around the world with our latest generation of hardware, the Xbox Series X. This means gamers will see faster load times, improved frame rates, and experience Xbox Series X|S optimised games," Microsoft announced.

"When you talk about Xbox's mission to bring the joy and community of gaming to everyone on the planet, which I absolutely love, that is precisely aligned with Microsoft's mission, which is to empower every person and every organisation on the planet to achieve more," said Microsoft CEO Satya Nadella.

"We believe that games, that interactive entertainment, aren't really about hardware and software. It's not about pixels. It's about people. Games bring people together," said Phil Spencer, Head of Xbox.

The company is organising first-ever Xbox and Bethesda Showcase on June 13, when it will unveil best and biggest games lineup ever. Xbox is building its own streaming devices for cloud gaming to reach gamers on any TV or monitor without the need for a console at all. Cloud gaming through Xbox Game Pass Ultimate will launch in Australia, Brazil, Mexico, and Japan later this year, the company announced.

Xbox is also working with telecommunications providers on new purchasing models like Xbox All Access, which allows consumers to buy both a console and Game Pass for a low monthly price, rather than spending money up front. In the next few weeks, cloud gaming on the browser will open to all Xbox Game Pass Ultimate members. With Edge, Chrome, and Safari support, players will be a click away from gaming on almost any device. Later this year, Microsoft will add cloud gaming directly into the Xbox app on PC and integrate it into our console experience to light up scenarios like try before you download.

(The above story first appeared on LatestLY on Jun 11, 2021 11:45 AM IST. For more news and updates on politics, world, sports, entertainment and lifestyle, log on to our website latestly.com).