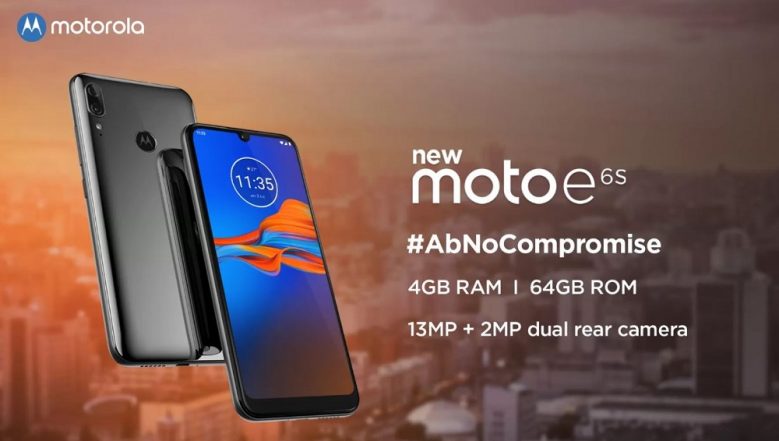 Motorola India is gearing up to launch a new smartphone in the Indian market. To be called as Moto E6S, the smartphone will be an affordable offering from Motorola, which will be retailed online via Flipkart. The phone maker has also started sending out invites to the media, which clearly hints at arrival of a new smartphone. Though the invite specifically reveals Moto E6S launch, but Flipkart's teaser clearly mentions the launch of the phone. If the market rumours are to be believed, the upcoming Moto E6S could be a rebranded version of Moto E6 Plus, which was unveiled at the IFA 2019 last week. Google Pixel 4, Pixel 4 XL Smartphones Likely To Be Launched on October 15.

The media invitation mentions that the new phone will be unveiled on September 16 at 12PM IST. No other details have been mentioned in the invitation. However, the Flipkart teaser clearing confirms that Moto E6S will get a 4GB RAM, which is also seen on the Moto E6 Plus. Likely to be rebranded version of E6 Plus, the smartphone could borrow features and specs from the latter. The Moto E6 Plus smartphone comes with a 6.1-inch HD+ display with resolution of 720x1560 pixels. The phone will be powered by an octa-core Helio P22 chipset. The phone will be backed by a 3,000mAh battery. The phone will also be equipped with rear mounted fingerprint sensor.

Camera double toh creativity bhi double! #AbNoCompromise on sharp photos thanks to the 13 MP dual camera system with 2 MP depth camera at a zabardast price. We have something spectacular in store for you! https://t.co/WTPDbj1vvN

As far as the prices are concerned, it is believed that the phone will be eyeing for a competitive price tag as the fact that this will be an affordable smartphone from Motorola. The pricing of the smartphone is expected to be in-line with the version for the Latin America, which is priced at EUR 139. We can expect similar pricing from Motorola for Moto E6S in India.