Apple has launched the new Apple Watch Series 4 smartwatch alongside three new iPhones at its annual event that was held at Steve Jobs Theatre. 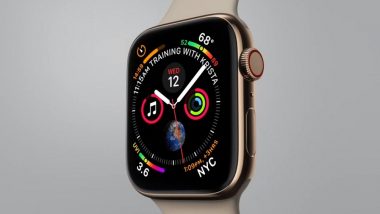 Designed for faster performance, the new 2018 edition of smartwatch gets new watch faces along with new generation accelerometer and gyroscope, which can sample motion data 8X faster. Moreover, the new Apple Watch Series 4 can also detect a fall and automatically calling the emergency contact.

The device also supports ECG, wherein the users can take an ECG by simply opening the app and placing the finger on the digital crown. The electrical impulses of the heartbeat is detected and the results are shown to the user. The entire process takes around 30 seconds. The company will be rolling out this feature to US audience by later this year whereas the remaining markets are expected to see this feature later on. iPhone XS Max, iPhone XS & iPhone XR; Know Specifications, Features & Price of New Apple Phones in India.

Last look at the #AppleWatchSeries4. Screen is 30% larger than predecessor – more info and shortcuts can be displayed.

As far as the display is concerned, the new 2018 iteration of Apple Watch features a bigger screen which is claimed to be 30 per cent larger than the predecessor. The interface of the smartwatch has also been redesigned for a bigger screen as well as richer details. Moreover, the speaker equipped on the Apple Watch is claimed to be louder by 50 percent. Apple iPhone Xs Max, iPhone Xs & iPhone Xr Launched at $749, $999 & $1099; Shippings to Start From September 21.

Moreover, the new Watch bands will work with the previous Apple Watch models too. A Hermes Edition and new Nike+ bands are also on offer. The Apple Watch Series 4 is priced at $399 for the GPS edition whereas the cellular version retails at $499. However, the prices for the Watch Series 3 now starts at $279.

(The above story first appeared on LatestLY on Sep 13, 2018 04:08 PM IST. For more news and updates on politics, world, sports, entertainment and lifestyle, log on to our website latestly.com).