OnePlus will announce prices for the products such as OnePlus Nord CE 2 Lite 5G, OnePlus 10R 5G and OnePlus Nord Buds on April 28, 2022. 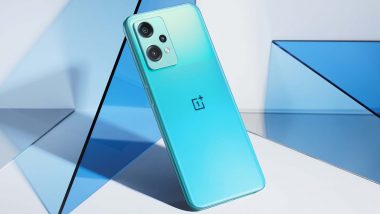 OnePlus India is all set to launch a host of new products on April 28, 2022. The company will announce prices for the products such as OnePlus Nord CE 2 Lite 5G, OnePlus 10R 5G and OnePlus Nord Buds. The Chinese tech brand officially teased the design of the upcoming Nord CE 2 Lite 5G giving us the first glimpse ahead of its scheduled launch. It will be an affordable offering from the brand that could be around Rs 20,000. OnePlus 10R 5G Confirmed To Be Powered by MediaTek Dimensity 8100 Max SoC.

The new OnePlus Nord CE 2 Lite 5G could feature an octa-core Snapdragon 695 SoC with 8GB of RAM. There would be a triple camera module at the back consisting of a 64MP primary lens. The company recently released the first official image of the Nord CE 2 Lite 5G via its Twitter account.

The image reveals the rear design of the smartphone confirming the presence of a triple camera setup, which resembles the Realme 9 Pro+ 5G's camera setup. The company brand logo sits in the centre, while the power button is positioned on the right side. The phone is also expected to get a 3.5mm headphone jack located at the bottom of the device. It is likely to be backed by a 5,000mAh battery with 33W fast charging support. The phone is tipped to get a 6.59-inch display. The exact specifications and prices will be announced next week.

(The above story first appeared on LatestLY on Apr 18, 2022 11:53 PM IST. For more news and updates on politics, world, sports, entertainment and lifestyle, log on to our website latestly.com).