Realme is set to launch the Realme GT Neo 3 smartphone in India on April 29, 2022 at 12:30 pm IST. The company made this announcement through its official Twitter handle. 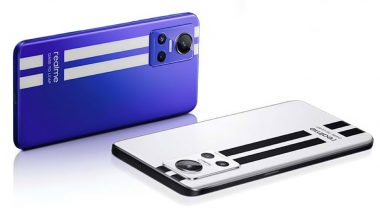 The Chinese smartphone brand Realme is set to launch the Realme GT Neo 3 in India on April 29, 2022. The company made this announcement through its official Twitter handle. As per details confirmed by the brand, the gaming-oriented handset will go on sale in India from May 4, 2022. It's worth noting that the GT Neo 3 was launched in the home market last month. Realme Q5, Q5 Pro Smartphones Launched in China; Prices, Features & Specifications.

According to the Realme India microsite, the prices of the Realme GT Neo 3 will be announced during the launch event that is scheduled for 12:30 pm IST on April 29. The company is yet to reveal more details about the launch. If the recent reports are to be believed, Realme will offer the phone in three shades - Asphalt Black, Nitro Blue, and Sprint White. It is likely to come in three configurations — 8GB + 128GB, 8GB + 256GB, and 12GB + 256GB.

The Realme GT Neo 3 could be priced at a similar range as the Chinese variant, which starts from CNY 1999 (around Rs 24,000). Do note, that the phone in two models based on their battery capacities and charging speeds. And we expect both the models to arrive in the Indian market.

This, and lots more in the #realmeGTNEO3 that will blow your mind! 🤩

The Chinese variant comes with a 6.7-inch 2K display with a 120Hz refresh rate. It offers a 1,000Hz touch sampling rate, HDR10+ and DC dimming support. There's a MediaTek Dimensity 8100 5G chipset under the skin which is paired with up to 12GB of RAM and up to 256GB of onboard storage. It runs on Android 12 with Realme UI 3.0 on top. 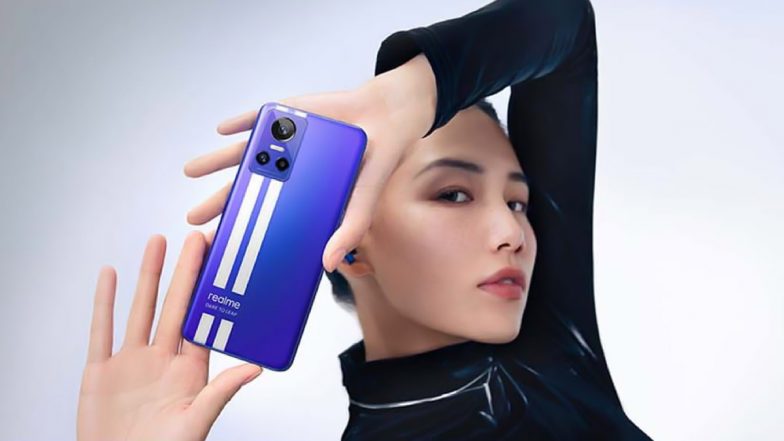 For photography, the handset packs a triple rear camera module housing a 50MP Sony IMX766 primary sensor with OIS and EIS. There's also an ultra-wide-angle lens with a 119-degree field of view and a macro shooter. Realme offers the phone in two battery options - 4,500mAh with 150W UltraDart Charging support and a 5,000mAh with 80W fast charging support.

(The above story first appeared on LatestLY on Apr 22, 2022 10:58 PM IST. For more news and updates on politics, world, sports, entertainment and lifestyle, log on to our website latestly.com).