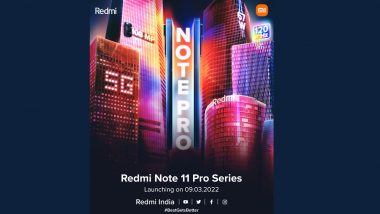 Redmi Note 11 Pro Series was launched in China last year, and now, the same models will be launched in the country on the above-mentioned date. The Pro model is said to come with a 6.67-inch FHD+ AMOLED display, a MediaTek Helio G96 SoC paired with up to 8GB of RAM, a 108MP quad rear camera setup, a 16MP selfie shooter, and a 5,000mAh battery with 67W fast charging support.

On the other hand, Redmi Note 11 Pro+ is expected to feature a 6.67-inch AMOLED screen, a Snapdragon 695 chipset, 8GB of RAM, a 108MP triple rear camera setup, a 5,000mAh battery with 67W fast charging support. Apart from this, nothing more is known. We expect the company to release a few more teasers before its official launch.

(The above story first appeared on LatestLY on Feb 25, 2022 02:46 PM IST. For more news and updates on politics, world, sports, entertainment and lifestyle, log on to our website latestly.com).