Brood X Cicadas Invasion in US: What Are the Cicadas? Why Are They Swarming Back After 17 Years? Should You Be Worried? All You Need to Know About the Creepy Billion-Bug Arrival

Trillions of cicadas that have been underground since 2004 are about to emerge in 15 states in the United States of America. What are the cicadas? Why are they swarming back? Should you be worried? In this article, we bring you all you need to know about the creepy billion-bug arrival. 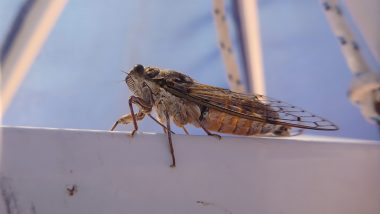 We are in the middle of a pandemic, and it appears Americans have a little more on their way to tackle. You may have heard the buzz around Brood X cicadas! Trillions of cicadas that have been underground since 2004 are about to emerge in 15 states in the United States of America. While the insects, called Brood X won’t cause humans any harm, people are still concerned. Before invading parks and people’s gardens and backyards, cicadas have already conquered social media and media outlets. The Brood X cicadas will burst out of the soil after 17 years, shed their skin, mate, lay eggs—all against the backdrop of the deafening noise that males make to attract females. However, there are a lot of queries, and you may look for those answers. What are the cicadas? Why are they swarming back? Should you be worried? In this article, we bring you all you need to know about the creepy billion-bug arrival.

What Are the Cicadas?

The cicadas are a superfamily, the Cicadoidea, of insects in the order Hemiptera. Brood X, also called the Great Eastern Brood is one of the 15 broods of periodical cicadas that appear regularly throughout the eastern US.

Billions of cicadas will soon appear in the eastern US, the biggest emergence event since 2004 https://t.co/LEWV6LAGT3 pic.twitter.com/pWUF573v2j

Why Are They Swarming Back After 17 Years?

According to entomologists, America is believed to be the only place in the world that has periodic cicadas that stay underground for either 13 or 17 years. The bugs only emerge in huge numbers when the ground temperature reaches about 64 degrees. The insects emerge from the surface of the ground, shed their skins on trees and other surfaces, thus becoming adults. The male cicadas make a loud noise, which is their way of attracting a female of the same species so they can reproduce. The mature cicadas fly, mate, lay eggs in twigs, and then die within several weeks. Locust Swarm Attacks North India: Scary Pics and Videos of 'Tiddi Dal' From Rajasthan, Madhya Pradesh and Uttar Pradesh Worry Farmers.

Should You be Worried?

Cicadas may be loud, but they pose very little threats. The cicadas have been in the country the entire time, only quite, feeding off tree roots underground, waiting for their body clocks to tell them it is time to come out and breed. These insects do not bite or sting. Besides, they are not attracted to homes and typically stay outsides. Cicadas also don't harm plants and trees.

Where Will the Brood X Cicadas Emerge in the US?

According to reports, 15 US states are most likely to see big numbers of Brood X cicadas in May and June 2021. The target zone stretches from Indiana to Georgia to New York State and Michigan in the north.

Usually, cicadas appear during the end of May, but this year, entomologists expect them to appear by mid-May. The last time they emerged was in 2004. It’s a sight that is hard to miss!

(The above story first appeared on LatestLY on May 08, 2021 11:50 AM IST. For more news and updates on politics, world, sports, entertainment and lifestyle, log on to our website latestly.com).