Cicada Safari App: How to Track Millions of Emerging Brood X Cicadas in US? This Interactive Map Will Help You to Find the Insects' Location

Cicada Safari—a smartphone app is launched that lets users track their whereabouts. So, what is the app all about? How can you download it? In this article, we will tell how and more about Cicadas' arrival in US states. 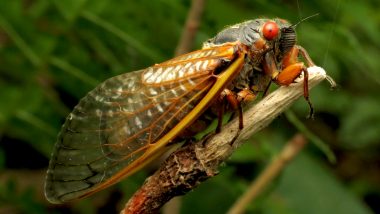 The Cicadas are coming, or they already did in parts of the eastern US. The long-awaited cicadas of Brood X have started tunneling out from their underground homes for the first time in 17 years, with trillions expected in the coming weeks. The District of Columbia and the surrounding states of Maryland and Virginia have reported sightings earlier than most other states. As more of the red-eyed, signing insects is expected to appear in other parts of the country, there’s an app that may help you track their location. Cicada Safari—a smartphone app is launched that lets users track their whereabouts. So, what is the app all about? How can you download it? In this article, we will tell how and more about Cicadas' arrival in US states.

What is Brood X Cicadas?

The cicadas are a superfamily, the Cicadoidea, of insects in the order Hemiptera (true bugs). Brood X, also known as the Great Easter Brood is one of the 15 broods of periodical cicadas that appear regularly throughout the eastern US. They are different than the annual cicadas. The Brood X spend almost their whole lives a foot or two underground, and then in the spring of their 13th or 17th year, depending on the type, mature cicada emerge for a brief adult stage. They synchronise in huge numbers for a massive mating frenzy.

Some US states have already reported cicadas sightings. Residents of those areas have taken to social media to share the evidence, while other places still await the bugs' big arrival.

Cicada Safari App: How to Download? Can You Track the Cicadas?

Gene Kritsky, an insect expert, who worked with Mount St. Joseph University’s Center for IT Engagement in Cincinnati created the Cicada Safari App. It is a crowd-sourcing effort to track the insects. The app will allow users to take pictures of the little buggers, document their location, and send them in. The application can be downloaded for free. You can CLICK HERE to download Cicada Safari in Apple’s App Store and CLICK HERE to download Cicada Safari on Google Play. Besides, the app is expected to become part of historical data to see how Brood X is increasing or declining over the years.

Not only the above app, but the University of Connecticut has also created two interactive maps that display the cicadas’ expected location based on a database of records from past experiences.

The swarms of red-eyed bugs are soon to be buzzing through the air in parts of the US. While some places have already reported sightings, other states are expecting the end of this month or June 2021. However, there is nothing to worry about, as the insects are harmless.

(The above story first appeared on LatestLY on May 14, 2021 02:32 PM IST. For more news and updates on politics, world, sports, entertainment and lifestyle, log on to our website latestly.com).