Two skeletons, a young male and female were found in one grave with the man's face turned towards the woman. 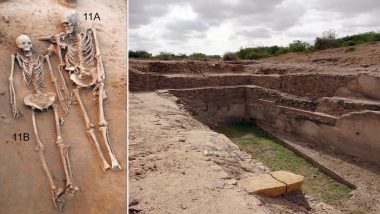 Archaeologists have made a first of its kind discovery of a couple's skeleton from Rakhigarhi in Harayana, some 150km northwest of Delhi. Researchers revealed that it was a joint burial of a couple in the Harappan cemetery. Two skeletons, a young male and female were found in one grave with the man's face turned towards the woman. There is no clear evidence if one was buried after the other but there is evidence that the burials took place simultaneously. Deccan College Deemed University team have made these findings. 'Mahabharata' Era Relics Found in UP by Archaeological Survey of India.

There have been numerous excavations from the Harappan era. Settlements and cemeteries have been discovered before but this is the first time a couple's burial has come up. This finding has definitely sparked an interest among the archaeologists. The analysis of these findings was done by the department of archaeology of Deccan College Deemed University and the Institue of Forensic Science, Seoul National University College of Medicine, Seoul, Korea. The findings are published in international journal ACB journal of Anatomy and Cell Biology.

Vasant Shinde, the author of the research was quoted in TOI report that the Harappans believed in life after death. They kept pots along with the skeletons. There have been discoveries of joint burial but it was regarded as a wife's sacrifice over her husband's death. "Other archaeologists claimed it was difficult to estimate the sexes of the individuals, and they may not have been a couple. Other than the contentious Lothal case, none of the joint burials reported from Harappan cemeteries till date have been anthropologically confirmed to be a couple’s grave,” he was quoted. 5000-Year-Old Mummified Cats Uncovered From Egyptian Excavation Site in Cairo, View Pics.

The analysis and field survey was conducted in Pune and the sexes of these skeletons were determined. The way these skeletons were found with their faces towards each other, it is predicted that there was lasting affection between them. "We can only infer, but those who buried the two individuals may have wanted to imply that the love between the two would continue even after death," Shinde continued. Although joint burials have been found, a couple's grave is a first. A total of 63 graves have been uncovered from Rakhigarhi cemetery, but this couple skeleton was a first.

(The above story first appeared on LatestLY on Jan 09, 2019 11:19 AM IST. For more news and updates on politics, world, sports, entertainment and lifestyle, log on to our website latestly.com).