How to Calculate Your Dog's Age in Human Years? The 1:7 Ratio May Not be So Accurate, Scientists Give a New Formula 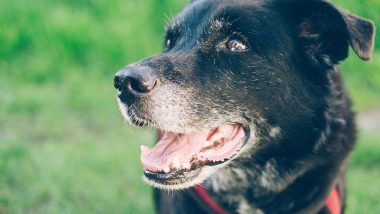 Dog owners may have been calculating the age of their pooches the wrong way for so long. The ratio of 1:7 is the very commonly referenced way of calculating a pet's age. Usually, a year-old dog is said to be equivalent of seven human years as per this calculation. But scientists from the University of California San Diego School of Medicine have said that it is not an accurate method, as dogs grow rapidly only in the initial years and their growth eventually slows down. According to the new method, they consider a “epigenetic clock”, to calculate a dog's age. The study has been published in the journal Cell Systems. Keeping a Dog at Home My Lead to Longer Life and Better Heart Health.

For this research, the team analysed blood samples of 105 Labrador retrievers. They studied the changing pattern of chemical tags in dog and human genomes, as both aged. The new epigenetic clock determines the age of a cell, tissue or organism. Scientists say the one-year-old dog is similar to a 30-year-old human. But a four-year-old dog is the equivalent of a human 52-year-old. A dog's ageing slows down by the age of 7, so by 9 years, a dog would be equivalent to a person in their mid-60s. "This makes sense when you think about it — after all, a nine-month-old dog can have puppies, so we already knew that the 1:7 ratio wasn’t an accurate measure of age," said senior author Dr Trey Ideker of the UC San Diego School of Medicine. World’s Smallest Living Dog, ‘Miracle Milly’ Is Cloned 49 Times in South Korea’s Laboratory, Becomes the Most Cloned Canine.

As per the 1:7 ratio, a 10-year-old dog is about the age of 70 but dogs do not grow so rapidly. So that theory becomes inaccurate. This is the method most vets use to calculate a dog's age while treating them. The new study reveals that dogs may be older than we have previously thought. But it is also limited because this has been calculated considering just one breed of dogs. And different breeds may have a different life expectancy.

(The above story first appeared on LatestLY on Jul 03, 2020 05:21 PM IST. For more news and updates on politics, world, sports, entertainment and lifestyle, log on to our website latestly.com).