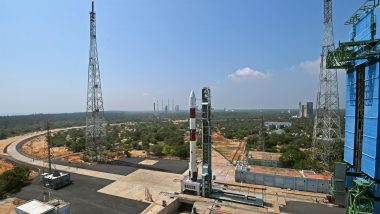 Sriharikota, February 28: India's Polar Satellite Launch Vehicle-C51 (PSLV-C51) rocket loaded with 19 satellites from Brazil, the US and India lifted off from the rocket port at Sriharikota in Andhra Pradesh on Sunday morning. The rocket carrying Brazil's 637-kg Amazonia-1 satellite as its primary passenger and 18 others (13 from the US and five from India including a defence satellite) as co-passengers lifted off from the first launch pad at Satish Dhawan Space Centre (SDSC) here at 10.24 a.m. on Sunday.

India's first space mission for 2021 is one of the longest for a PSLV rocket and is expected to conclude 1 hour, 55 minutes and 7 seconds into its flight. If all goes well India will end the mission orbiting a total of 342 foreign satellites, all for a fee. The rocketing is a fully commercial one of New Space India Ltd (NSIL) with the primary passenger being the Amazonia-1 satellite. PSLV-C51 Carrying Amazonia-1 and 18 Other Satellites Launched Successfully, Nanosatellite Carrying PM Narendra Modi’s Photograph, Bhagavad Gita To Reach Space.

PSLV-C51 Rocket Lifts Off With 19 Satellites

At 10.24 a.m. the 44.4 metre tall PSLV-C51 rocket blasted off from the first launch pad here and slowly rose-up towards the skies with thick orange flame at its tail. The rocket slowly gained speed as it went up while emitting a rolling thunder sound. Amazonia-1 is the optical earth observation satellite of National Institute for Space Research (INPE).

This satellite would further strengthen the existing structure by providing remote sensing data to users for monitoring deforestation in the Amazon region and analysis of diversified agriculture across the Brazilian territory, Indian Space Research Organisation (ISRO) said.

The 18 co-passenger satellites include four from IN-SPACe (three UNITYsats from consortium of three Indian academic institutes (Jeppiaar Institute of Technology, Sriperumbudur, G.H.Raisoni College of Engineering, Nagpur and Sri Shakthi Institute of Engineering and Technology, Coimbatore), one Satish Dhawan Sat from Space Kidz India) with an engraved picture of Prime Minister Narendra Modi on it as well as Bhagavad Gita in a flash.

For the third time ISRO is using the PSLV rocket's DL variant that will have two strap-on booster motors. In normal configuration the PSLV is a four stage/engine expendable rocket powered by solid and liquid fuels alternatively. Six booster motors will also be strapped on to the first stage to give higher thrust during the initial flight moments.

But the 44.4 metre tall PSLV rocket that flew on Sunday was the DL variant having only two strap-booster motors. This variant was used for the first time to put the Microsat R satellite into orbit on January 24, 2019.

The Indian space agency has PSLV variants with two and four strap-on motors, larger PSLV-XL and the Core Alone variant without any strap-on motors. The choice of the rocket to be used for a mission depends on the weight of the satellite and the orbit where the satellite has to be orbited. Be that as it may, the PSLV-C51 mission is one of longest ones.

As per its flight plan, the rocket will put the 19 satellites into Sun Synchronous Orbit over a duration of 1 hour, 55 minutes and 7 seconds. During its flight, the rocket's fourth stage engine will be cut off and restarted a couple of times, the first one will be at 16 minutes into its flight.

(The above story first appeared on LatestLY on Feb 28, 2021 12:12 PM IST. For more news and updates on politics, world, sports, entertainment and lifestyle, log on to our website latestly.com).