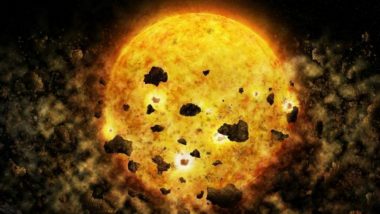 Washington, July 19: Observations from NASA's Chandra X-ray Observatory indicates that scientists may have for the first time seen a young star devouring a young planet or planets. "Computer simulations have long predicted that planets can fall into a young star, but we have never before observed that," said lead researcher Hans Moritz Guenther from Massachusetts Institute of Technology's Kavli Institute for Astrophysics and Space Research.

"If our interpretation of the data is correct, this would be the first time that we directly observe a young star devouring a planet or planets," Guenther said.

The study, published in the Astronomical Journal, suggests that the parent star, located about 450 light years from Earth, is now in the process of devouring the planetary debris resulting from collision of infant planetary bodies. This discovery gives insight into the processes affecting the survival of infant planets.

#News: Chandra data indicates that a young star has likely destroyed and consumed an infant planet! If so, this would be the first time that scientists have witnessed such an event! More about the discovery: https://t.co/lhoNgQonKs pic.twitter.com/TmNtGtnH3B

Since 1937, astronomers are puzzled over the curious variability of the young star named RW Aur A. Every few decades, the star's optical light has faded briefly before brightening again. In recent years, astronomers observed the star dimming more frequently, and for longer periods. The new study could explain what caused the star's most recent dimming event -- a collision of two infant planetary bodies, including at least one object large enough to be a planet. As the resulting planetary debris fell into the star, it would generate a thick veil of dust and gas, temporarily obscuring the star's light.

The star's previous dimming events may have been caused by similar smash-ups, of either two planetary bodies or large remnants of past collisions that met head-on and broke apart again. "Much effort currently goes into learning about exoplanets and how they form, so it is obviously very important to see how young planets could be destroyed in interactions with their host stars and other young planets, and what factors determine if they survive," Guenther said.

(The above story first appeared on LatestLY on Jul 20, 2018 12:06 AM IST. For more news and updates on politics, world, sports, entertainment and lifestyle, log on to our website latestly.com).