National Honey Bee Day 2019: Why Bees Are Important For the Survival of the Human Race

Honey bees are important for healthy eco-system as they pollinate plants which is essential for human existence. Global warming steered by climate change is one of the major issue questioning their existence on the planet. 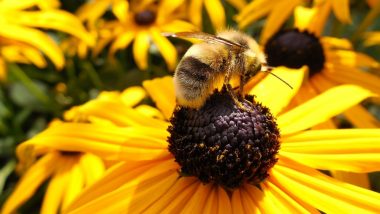 World-renowned physicist Albert Einstein once said, "If the bee disappeared off the face of the Earth, man would only have four years left to live." Bees are the world's most important pollinators. They play a big in human existence and are of huge economic importance. While, bees are vital for the pollination of many fruits, vegetable and seed crops, their population has decreased significantly in recent years. Global warming steered by climate change is one of the major issue questioning their existence on the planet. And as National Honey Bee Day is celebrated in the United States on August 17, we take a look at why honey bees are essential for our survival. World’s First Honey Bee Edible Vaccine Discovered by Finland Scientists to Protect the Queen Bees.

Honey bees are important for healthy eco-system as they pollinate plants which is essential for human existence. It's not just honey and wax that bees provide us with, but a list of fruits, vegetables, grains and flowers. Bees do it while collecting pollen and nectar for food supplies. They move pollen from male flower parts to female receptors, helping in fertilising the plants. Although butterflies, birds and other flies also do this activity, honey bees, in particular, are known to keep the cycle going. Due to which, honey bees are important to food crops as they can be managed by farmers and introduced in their farms or wherever they want. Climate Change Disrupting Plant-pollinator Relationship: Study.

If these pollen-distributing insects die, it would result in mass starvation on an unprecedented and unacceptable scale. While it would completely bring our existence to an end, some plants would survive and it would terribly lower the quality of their seeds. For example, potatoes and carrots will survive as they grew underground, but corn plant which is wind pollinated may not able to produce its fruit. Honeybees are also credited for mass flowering crops. Do Bees Understand Math Better Than Humans? The Insects Can Grasp The Concept of Zero Better Than We Can.

Colony collapse disorder (CCD) is one of the issues that affect the majority of worker bees. It occurs when a colony of bees disappear and leave behind a queen, food and few nurse bees for the remaining young bees. And some of the causes include infections, malnutrition and the loss of habitat.

The size, shape and ability to vibrate make honey bees more effective at pollinating certain crops. Honey bees play a very important role in the pollination of other important crops such as cotton and flax compared to other crops. Valuable non-food products like beeswax used in cleaning and beauty products are also a result of the efforts of bees. Bees are also commercially used as a pollinator of food crops in the United Kingdom and many other places.  Commercial fruits and vegetables like apples, pears, beans, strawberries, blueberries, raspberries, blackberries and oilseed are dependent on the pollination of bees. Hence if bees cease to exist, humans will face a big survival crisis.

(The above story first appeared on LatestLY on Aug 17, 2019 08:30 AM IST. For more news and updates on politics, world, sports, entertainment and lifestyle, log on to our website latestly.com).