Scientists Hunt for Secrets in 12-Billion-Year-Old Signal From Universe’s Dark Age of the Cosmos, the Starless Era (Watch Videos) 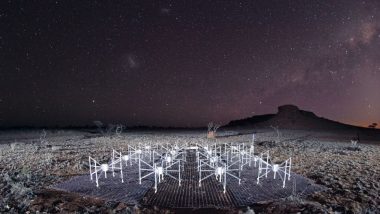 While a starry sky is something we all look up and enjoy, there was a time when the stars were not formed. An international team of scientists is seeking to study a signal from the starless “dark age” of the Universe. They are trying to detect and measure the signal which travelled through space for 13 billion years. According to a report by researchers from the University of Washington, the University of Melbourne, Curtin University and Brown University they had achieved an almost 10-fold improvement of radio emission data gathered by the Murchison Widefield Array telescope in Western Australia. It was published last year in Astrophysical Journal. According to a report in website phys.org, the signal could help explain how star formation shaped the early universe. NASA Discovers Possible Evidence of ‘Parallel’ Universe Where Time Runs Backwards!

Team member Professor Miguel Morales, University of Washington was quoted as saying, "We think the properties of the universe during this era had a major effect on the formation of the first stars and set in motion the structural features of the universe today. The way matter was distributed in the universe during that era likely shaped how galaxies and galactic clusters are distributed today." Biggest Explosion in Universe Since Big Bang Detected by Astronomers.

Curtin University researchers have developed a particle detector at the remote site of the Murchison Widefield Array radio #telescope that is capable of conducting a ground-breaking study into mysterious #cosmicrays pic.twitter.com/tRu0PPfiJc

According to the report, hydrogen atoms began to aggregate and form the first stars when the universe was just one billion years old putting the dark age to an end. The signal which the researchers are looking for is an electromagnetic wave given off by the neutral hydrogen that populated the universe before stars were formed. At the time, the signal had a 21-centimetre wavelength — but the universe’s expansion has stretched it to about two metres. Before the stars appeared, the latter was hot and dense, with electrons and photons trapping each other and rendering it opaque.

Check Out The Picture Below:

Radioastronomers look to hydrogen for insights into the Universe’s first billion years. They are trying to detect a line in the spectrum of hydrogen with a wavelength of 21 cm: https://t.co/HzdvXcOK9y

Morales also said, "And it's difficult to detect because, in the 13 billion years since that signal was emanated, our universe has become a very busy place...filled with other activity from stars, galaxies and even our technology that drown out the signal from the neutral hydrogen." The team has around 3,000 hours of additional emission data that has been collected by the radio telescope. The researchers are trying to filter out interference and get closer to that signal from neutral hydrogen that may reveal details about the dark age.

(The above story first appeared on LatestLY on Jun 14, 2020 09:25 PM IST. For more news and updates on politics, world, sports, entertainment and lifestyle, log on to our website latestly.com).