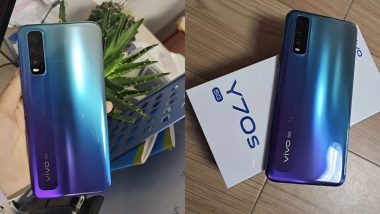 Vivo, the Chinese smartphone manufacturer is gearing up for the launch of a new smartphone under its Y series. It was previously reported that the company is looking to bring Vivo Y30 to the Indian sometime next month. Ahead of the launch, new poster reportedly of Vivo Y70s has surfaced online. The poster seems to have revealed the phone maker's plan to launch this new smartphone as well. The new official teaser released by the company hints that the phone will come with 5G support. Whereas another post on Weibo hints that it would be offered three colour options. The post on Weibo also reveals the live images of the Vivo Y70s giving the first glimpse of its design and packaging. Xiaomi Redmi TWS Earbuds Teased Online.

Going by the poster images, the Vivo Y70s will come with a hole-punch display along with a triple camera module at the rear. The smartphone will come equipped with a massive 4,500mAh battery and 48MP main camera.

The Vivo Y70s is likely to be powered by Samsung's Exynos 880 chipset with two Cortex-A77 cores, which will be clocked at 2GHz. The processor is likely to be paired with an 8GB of RAM and 128GB of onboard storage. The handset is expected to run on Android 10. As per the new market report, the handset is expected to get 18W charging support. If the reports are to be believed, the official launch of Vivo Y70s is very close. So, we can expect an official announcement from Vivo very soon.

(The above story first appeared on LatestLY on May 25, 2020 12:02 AM IST. For more news and updates on politics, world, sports, entertainment and lifestyle, log on to our website latestly.com).