Google has announced revamping its 992 emojis on World Emoji Day 2021, which is marked on July 17. From bikini, face mask, pie emojis to colorful vehicles, next-gen Android 12 is all set to change them for better reach across the globe. 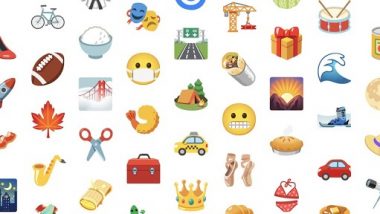 San Fransisco, July 17: Emojis have become an important part of our conversations these days as they help us in sharing the emotion and intention in messaging. To further make it more interesting for users, tech giant Google has announced that it is set to tweaking 992 of its emoji designs to make them more “universal, accessible, and authentic". Google has announced revamping its 992 emojis on World Emoji Day 2021, which is marked on July 17. From bikini, face mask, pie emojis to colorful vehicles, next-gen Android 12 is all set to change them for better reach across the globe.

Google has made the emojis cuter, more accurate, and flexible for their worldwide audience. In a blog post, the company announced that the new designs will arrive this fall alongside Android 12. However, it added that they’ll also be available on older versions with apps that use its Appcompat compatibility layer. The emojis are also making their way to other Google platforms like Gmail, Chrome OS, Google Chat, and YouTube Live Chat this month. World Emoji Day 2021: Indian Millennials, Gen Zies Find Hope in Emojis Amid COVID-19.

For example, the bikini emoji earlier looked like an invisible ghost was wearing it. “Now, anybody is a bikini body,” Google wrote in its post. Meanwhile, the current mask-wearing emoji looks sad with eyes closed and drooping, but the eyes are wide open in the new one. Other changes can be seen in transportation (car, truck, cab) emojis, making better use of the available space. Google humorously says the "new design for motorway will pass its next driving exam".

In a blog post, Google showed what changes it will make in the new emojis. You can check out the differences between the old Emoji and their new designs here. In terms of availability, Google`s emoji redesign will start appearing in products this month.

(The above story first appeared on LatestLY on Jul 17, 2021 09:41 PM IST. For more news and updates on politics, world, sports, entertainment and lifestyle, log on to our website latestly.com).