Time to put on your tin-foil hats as conspiracy theorists are now speculating that the best-selling American author Dean Koontz foresaw the coronavirus disease nearly 40 years ago in his novel 'The Eyes of Darkness'. 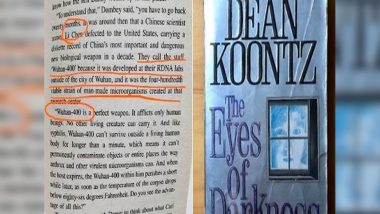 Washington D.C., February 28: Time to put on your tin-foil hats as conspiracy theorists are now speculating that the best-selling American author Dean Koontz foresaw the coronavirus disease nearly 40 years ago in his novel "The Eyes of Darkness".

According to Fox News, Koontz's 1981 thriller novel mentioned a deadly pathogen called "Wuhan-400", whose name is strangely similar to the Chinese province of Wuhan, which is the epicentre of coronavirus outbreak.A Twitter user named Nick Hinton shared an image of the page from the novel that describes the fictional "Wuhan-400" virus. Coronavirus Epidemic: COVID-19 to Cost World Tourism at Least $22 Billion, Says Global Tourism Body.

In the caption, he wrote: "A Dean Koontz novel written in 1981 predicted the outbreak of the coronavirus! "The post incited several responses from shocked and puzzled users."That's creepy," commented one user.

Another commented: "That's crazy. He probably didn't have a clue when he was writing it". Meanwhile, a gentleman -- seemingly an avid conspiracy theorist -- went into some more depth and explained: "The coming of a plague from China has been forecast for decades now. That it would be created in a bioweapons lab has also been stated by various fiction authors.

Whether this is because it was preplanned by elites or those who foresaw tapped into some Jungian race-conscious". However, to the dismay of conspiracy theorists, the similarity between the two bugs just stops at the term "Wuhan". Coronavirus Scare in India: 136 Under observation in Kerala, Says Health Minister KK Shailaja.

The virus depicted in Koontz's novel is vastly different from the actual strain in terms of its attributes and characteristics, reported Fox News. "For instance, `The Eyes of Darkness' describes that the "Wuhan-400" has a fatality rate of 100 per cent, whereas, the coronavirus only kills 2 per cent of its patients", said the report.