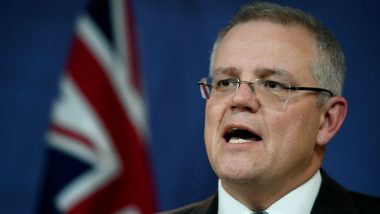 Australia, July 9: Australia has suspended its extradition agreement with Hong Kong, informed Prime Minister Scott Morrison. He further informed that Australia would extend the visas of some Hong Kong citizens in response to China's crackdown on personal freedoms and dissent.

Temporary work visa holders and student visa holders currently in Australia will have their visas extended, allowing them to stay in Australia for five years. After this period, they will have the opportunity to apply for permanent residency. China Opens New Office For Security Agents to Operate in Hong Kong, A Week After Passing Controversial National Security Law in City.

(The above story first appeared on LatestLY on Jul 09, 2020 09:28 AM IST. For more news and updates on politics, world, sports, entertainment and lifestyle, log on to our website latestly.com).