China detected the H10N3 strain of bird flu in a 41-year-old man living in Zhenjiang in the country's Jiangsu province. 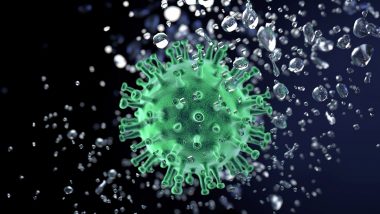 Beijing, June 1: H10N3, a strain of bird flu or avian influenza, has been found in a man in China, the country's National Health Commission (NHC) said today. According to the information available of the website of NHC, H10N3 has never been found in humans before. H5N1 is the most common form of bird flu, which is a viral infection that can infect not only birds, but also humans and other animals. China Reports 20 New COVID-19 Cases As Authorities Rush To Contain Mini-Outbreak in Guangdong.

China detected the H10N3 strain of bird flu in a 41-year-old man living in Zhenjiang in the country's Jiangsu province news agency Reuters reported quoting the NCH. The man contracted the virus from poultry. The risk of spreading of the H10N3 strain of bird flu on a large scale was very low, according to a statement on the website of the commission. The NHC also said there has not been any case of human infection of H10N3reported in the world before.

According to Sino Biological, the H10N3 strain of bird flu was isolated in Hong Kong in 1979, and in a live-bird market in Thailand in 2011. H10 subtype influenza viruses have been found in various species of waterfowl across worldwide geographic areas for more than 50 years, the website mentions. H10 viruses occasionally infect humans, it adds. COVID-19 Originated in Lab? 'Less Evidence on Coronavirus Spread From Animal to Human', Says Ex-FDA Head Scott Gottlieb.

Meanwhile, China has reported 91,122 confirmed cases of coronavirus or COVID-19 so far. Of the confirmed cases, 4,636 patients died, while 86,149 recovered, according to Worldometers.

(The above story first appeared on LatestLY on Jun 01, 2021 11:31 AM IST. For more news and updates on politics, world, sports, entertainment and lifestyle, log on to our website latestly.com).