The Fall of the Berlin Wall 30th Anniversary: What Happened During the Falling of Iron Curtain? Here’s Everything About the Historic Event 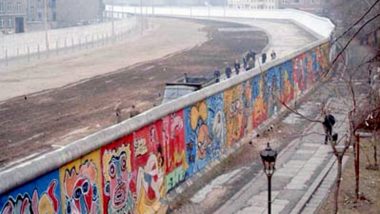 It has been thirty years since one of the most important events of the 20th century occurred—Fall of the Berlin Wall. And it did not happen overnight. The fall was preceded by decades of political oppression and economic backwardness. The Berlin Wall stood until November 9, 1989, when the head of the East German Communist Party announced that citizens of the German Democratic Republic could cross the border whenever they wanted. But what happened during the falling of Iron Curtain? As we observe the 30th anniversary of Fall of the Berlin Wall, here is everything you should know about the historic event. Fall of the Berlin Wall Google Doodle: Tech Giant Observes the 30th Anniversary of the Falling of 'Iron Curtain' With Touching Animated Doodle.

When the Head of the East German Communist Party announced that citizens could cross the border, ecstatic crowds swarmed the wall. Some crossed freely into West Berlin, while others brought hammers and pick and began to chip away at the wall. It has been 30 years; the Berlin Wall remains as one of the most potent symbols of the Cold War.

What is the Berlin Wall?

The Berlin Wall was a wall that separated the city of Berlin in Germany from 1961 to 1989. As per historical records, the motive behind the wall was to separate the eastern half from the western half. Also referred to as the ‘Iron Curtain,’ the wall was about 104 miles long and was built to prevent people from escaping the eastern half of Berlin.

What Happened During the Fall of Wall?

As the Cold War began to get over across Eastern Europe, the spokesman for East Berlin’s Communist Party announced a change in the city’s relationship with the West. Starting at midnight on November 9, 1989, citizens were free to cross the borders. The moment it was announced, East and West Berliners flocked to the wall. They were drinking beer and champagne, and chanted, ‘Tor auf,’ (open the Gate!). Millions of people from East Berlin, visited the West to celebrate the remarkable achievement. Some even brought hammers and pick to dismantle the wall, as bulldozers broke down section after section. The wall was gone, and Berlin was united for the first time since 1945.

The reunion of the Federal Republic of Germany and the German Democratic Republic was made official on October 3, 1990, nearly a year after the fall of the Iron Curtain. Ever since that day, November 9 is observed as one of the most significant days in the history of Germany.

(The above story first appeared on LatestLY on Nov 09, 2019 09:17 AM IST. For more news and updates on politics, world, sports, entertainment and lifestyle, log on to our website latestly.com).