Fayez Serraj, the UN-backed Prime Minister of Libya, has announced his intention to step down in October. 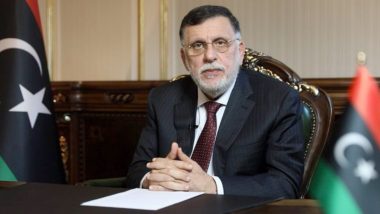 Tripoli, Sep 17: Fayez Serraj, the UN-backed Prime Minister of Libya, has announced his intention to step down in October.

"I call on the Dialogue Committee, which is the body charged with forming the new executive authority, to assume its historic responsibility to expedite the formation of a authority, so that we can all ensure a peaceful and smooth transition of power," Serraj said in a televised speech on Wednesday.

Serraj's UN-backed overnment of National Accord (GNA) based in Tripoli was formed in 2015 based on a political agreement that aimed to end the political division in the country.

The GNA had been engaged in a deadly armed conflict against the eastern-based army for more than a year over control of Tripoli, before Serraj's government recently took over all of western Libya.

(The above story first appeared on LatestLY on Sep 17, 2020 10:19 AM IST. For more news and updates on politics, world, sports, entertainment and lifestyle, log on to our website latestly.com).