The Indonesian government has extended tsunami warnings after the Anak Krakatau volcano erupted a second time on Sunday. 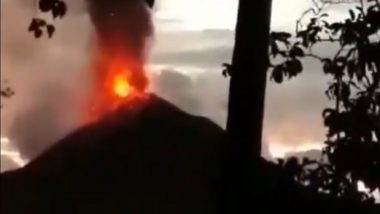 The Anak Krakatau is a relatively young volcano which has erupted causing massive tsunami in the Sunda strait (Photo: Video grab, Twitter)

The Indonesian government has extended tsunami warnings after the Anak Krakatau volcano erupted a second time on Sunday. Its first eruption caused a tsunami wave which has caused widespread destruction and the death of atleast 280 people.

Preliminary studies of the tsunami say that the volcano’s eruption caused underground tectonic activity and landslides undersea which created the killer tsunami waves of Saturday night.

The head of the National Disaster Management Agency, Sutopo Purwo Nugroho, held a news conference on Java. "Recommendations from [the] Meteorology, Climatology and Geophysical Agency are that people should not carry out activities on the beach and stay away from the coast for a while," he said.

He added, "The potential for a fresh tsunami is still possible because the volcanic eruption of Anak Krakatau continues to occur, potentially triggering another tsunami."

The Anak Krakatau volcano is a relatively young volcano, having emerged in the sea channel between the Java and Sumatra islands less than 100 years ago. The volcano in the Sunda strait of Indonesia was formed in 1927 after the Krakatoa volcano eruption.

The Anak Krakatau has had minor rumblings over the years and it had seen increased activity in recent months. However, most warning systems for a tsunami track earthquakes as a large displacement of water during an underground quake leads to the formation of a tsunami wave. Reports say that the recent volcanic eruption in the Anak Krakatu, apart from causing landslides also led to the collapse in the west-southwest flank of the volcano. A report on the BBC website analyses that this sudden activity would have sent millions of tonnes of rocky debris into the sea, pushing out waves in all directions.

This eruption at night combined with unusual tectonic activity saw few warning signals go off which led to so many Indonesians being caught unaware on the islands of Java and Sumatra.

Indonesia witnesses frequent earthquakes as the archipelago lies on the rim of fire – close to the Earth’s equator  and unstable tectonic plates in the Pacific Ocean. This has led to the formation of many volcanoes which see frequent eruptions and in turn cause massive tsunami waves.

Indonesia’s city of Palu saw more than 2,000 people die in September which was again caused by a powerful earthquake followed by another deadly tsunami wave.

(The above story first appeared on LatestLY on Dec 24, 2018 08:57 AM IST. For more news and updates on politics, world, sports, entertainment and lifestyle, log on to our website latestly.com).