IAEA: No Indication that North Korea Has Put a Halt to its Nuclear Programme

In a report published by the International Atomic Energy Agency (IAEA), the UN’s nuclear watchdog said North Korea is continuing work to produce plutonium for its nuclear weapon tests. 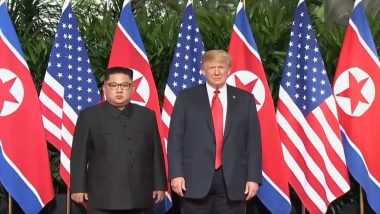 Despite the June 12 summit, North Korea has not reduced its nuclear programme (File photo)

Despite a high-profile summit between U.S. President Donald Trump and North Korea’s leader Kim Jong-un, Pyongyang has not reduced work on its nuclear programme. In a report published by the International Atomic Energy Agency (IAEA), the UN’s nuclear watchdog said North Korea is continuing work to produce plutonium for its nuclear weapon tests. IAEA said work is on including at the Yongbyon power plant.

The IAEA said it has been monitoring a site near the capital, Pyongyang, whose characteristics and construction history "are not inconsistent with a centrifuge enrichment facility". Construction of a possible additional reprocessing plant that could extract plutonium from used reactor fuel has continued, according to the report.

"The continuation and further development of the DPRK's nuclear programme and related statements by the DPRK are a cause for grave concern," IAEA chief Yukiya Amano said in the report, referring to North Korea's official name - the Democratic People's Republic of Korea.

According to the Washington Post, North Korea also appeared to be building one or two new liquid-fuelled intercontinental ballistic missiles.

The IAEA report outlining the extent of North Korea’s nuclear activity could throw a wrench into Donald Trump’s plan of meeting Kim Jong-un again because two moths since the first meeting has resulted in no concrete steps to halt Pyongyang’s nuclear activity.

In an interview with Reuters on Monday, Trump said he believed North Korea had taken specific steps toward denuclearization however 24 hours on his claims have been debunked by the most authoritative voice on nuclear activity in the world.

The IAEA’s report should not come as a surprise because since the June 12 summit the U.S. has sent Secretary of State Mike Pompeo multiple times to hammer out the details of the country’s path towards denuclearization but he has admitted that “things are not going well.”

Looking at North Korea’s record, the IAEA’s report confirms what has been the country’s long-standing dream – be a nuclear-capable country.

(The above story first appeared on LatestLY on Aug 22, 2018 06:38 AM IST. For more news and updates on politics, world, sports, entertainment and lifestyle, log on to our website latestly.com).