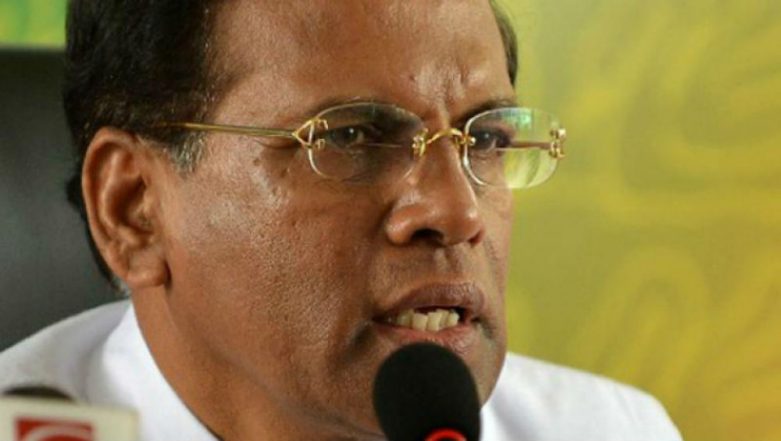 Colombo, May 6: Sri Lankan President Maithripala Sirisena has said that he believes the Islamic State (IS) terror group chose to target his country to show that "they still exist".

"I am shocked and can't understand why they chose Sri Lanka for this attack," Sirisena told the BBC in an interview. Serial Blasts In Sri Lanka on Easter Sunday, Churches And Hotels Hit; Nearly 156 People Dead, Over 400 Injured.

"I do question if it is because they do not have the ability to go head to head with the world's powerful nations... So they chose a country that had recently established peace, to make the statement that the Islamic State still exists."

Asked about the failure to act on the repeated warnings in the lead up to the killings, the President said: "It's clear that information had been received by those occupying top positions in intelligence services. However, I wasn't appraised of this information.

"They neglected their duties which is why I have taken action against them. These people have been removed from their offices and I have appointed a committee to investigate the matter," he added.

Amid the public outrage following the bombings, Defence Secretary Hemasiri Fernando and Police Chief Pujith Jayasundara were asked to resign. The President said these men had received prior warnings from state intelligence over possible attacks but had failed to brief him and others.

Asked whether he should be considering his own position after the security failure, Sirisena said: "Nowhere in the world have the heads of state resigned or relinquished their duties after bomb blasts. I believe my duty right now is to take the necessary action to face this challenge."

Responding to a query that whether the high-profile spat between him and Prime Minister Ranil Wickremesinghe was a reason behind the failure of the intelligence services to adequately share the information, Sirisena said that contrary to the "rumours", he and the Prime Minister "do not have such serious issues".

"To be clear, when it comes to action being taken with regard to matters relating to the national security, political differences and other issues are set aside."

Wickremesinghe earlier said he and his Cabinet Ministers had not been informed about the prior threats.

Meanwhile, the Sri Lankan police on Monday said they have discovered a suspected safe house in Nuwara Eliya city used by the suicide bombers.

The safe house located at Blackpool in Nuwara Eliya had been used for training purposes as well, investigations revealed.

The police said that detailed maps were among the items found in the two-storey house, Colombo Gazette reported.

Also, a sack of gunpowder was discovered by some parents near a school in the city. State schools in Sri Lanka resumed classes on Monday amid tight security.