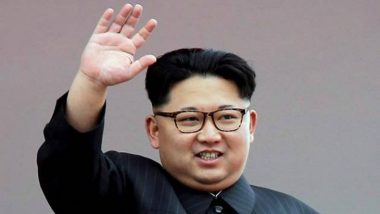 Pyongyang, June 28: A recent video of North Korea's Prime leader Kim Jong Un has created apprehension among the residents of the country, as per reports. The primer reportedly looked slimmer in the video clip. North Korean state broadcaster KRT on Friday aired a footage where the residents of Pyongyang were watching a clip from a recent concert attended by Kim and his party officials post the meeting of the Central Committee of his Workers' Party of Korea (WPK) in which he seemed to have lost a lot of weight. KRT reportedly also showed people worrying about Kim's health after watching the said video clip. Kim Jong Un's Apparent Weight Loss Worries North Koreans: Reports.

"Seeing respected general secretary looking emaciated breaks our people's heart so much," said a man in the video aired by KRT as reported by Reuters. The man reportedly added, "Everyone is saying that their tears welled up." Another resident of Pyongyang was quoted saying that everyone in North Korea is heartbroken over leader Kim Jong Un's apparent weight loss.  North Korea Should Be Ready for Dialogue With US: Kim Jong Un.

There have been various speculations over Kim Jong Un's health ever since he reportedly disappeared from the public eye for almost a month earlier this year only to reappear in the state media in June. Following which the analysts at a Seoul-based website that monitors North Korea, NK News, observed that Kim's watch looked to be fastened more tightly than before around his apparently slimmer wrist.

Kim Jong Un has a family history of heat problems and is known for being a heavy smoker and drinker. His successors also died of heart related ailment. Reports suggest that experts said Kim's weight loss can enhance the possibility of cardio vascular diseases. The reports about his ill-health have been doing rounds for some time now.

(The above story first appeared on LatestLY on Jun 28, 2021 11:21 AM IST. For more news and updates on politics, world, sports, entertainment and lifestyle, log on to our website latestly.com).