North Korea Should Be Ready for Dialogue With US: Kim Jong Un

North Korean leader Kim Jong-un said that the country should be ready for a dialogue, as well as a confrontation with the US, state media reported on Friday. 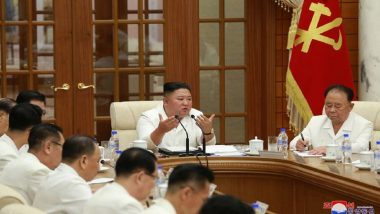 Seoul, June 18: North Korean leader Kim Jong-un said that the country should be ready for a dialogue, as well as a confrontation with the US, state media reported on Friday.

This is the first time Kim has spoken of the US since President Joe Biden took office in January, the Seoul-based Yonhap news Agency reported.  Joe Biden Meets Vladimir Putin: US - Russia Talks On Cyber-Warfare, Global Security

During a key Workers' Party meeting, Kim "made detailed analysis of the policy tendency of the newly emerged US administration toward our Republic and clarified appropriate strategic and tactical counteraction and the direction of activities to be maintained in the relations with the U.S. in the days ahead", Pyongyang's official Korean Central News Agency (KCNA) said in a report.

Kim also called for "sharply and promptly reacting to and coping with the fast-changing situation and concentrating efforts on taking stable control of the situation on the Korean peninsula", the KCNA added.

The Biden administration has recently completed its months-long review of its North Korean policy and said it would pursue a "calibrated, practical approach" toward the goal of the complete denuclearization of the Peninsula.

Kim's message also comes as the new US special representative for North Korea, Sung Kim, is set to travel to Seoul later this week for trilateral talks with his South Korean and Japanese counterparts, reports Yonhap News Agency.

(The above story first appeared on LatestLY on Jun 18, 2021 02:54 PM IST. For more news and updates on politics, world, sports, entertainment and lifestyle, log on to our website latestly.com).

Comments
Tags:
Dialogue with US Kim Jong-un North Korea President Joe Biden US US and North Korea World
Comments
You might also like