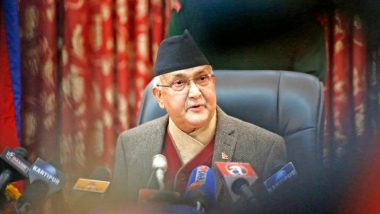 Kathmandu, July 13: Nepal's Prime Minister KP Sharma Oli on Monday said that real Ayodhya lies in Nepal and not in India. He also claimed that Lord Ram is a Nepali and not Indian. He alleged that India had set up disputed Ayodhya even though Lord Ram's kingdom would be located in the western part of Birgunj in Nepal. PM Narendra Modi Requested to Visit Ayodhya, Inaugurate Ram Temple Construction, Says President of Ram Janmabhoomi Trust.

"We have been oppressed a bit culturally. Facts have encroached. We still believe that we gave Sita to Indian Prince Ram. But we gave to the prince from Ayodhya, not India. Ayodhya is a village a little west to Birgunj, not the Ayodhya created now," PM Oli was quoted as saying by Nepali media on the occasion of Bhanu Jayanti.

"We are still thinking that we have given 'Sita' to Prince Ram of India," he said. The Prime Minister also argued that how can a prince can come so far to Janakpur for marriage if Ayodhya claim by India was real.

"Janakpur lies here and Ayodhya there and there is talk of marriage. There was neither telephone nor mobile then how could he know about Janakpur," Oli said.

(The above story first appeared on LatestLY on Jul 13, 2020 09:17 PM IST. For more news and updates on politics, world, sports, entertainment and lifestyle, log on to our website latestly.com).