Days after facing backlash from public over attending an expensive lunch by Japan Prime Minister Yoshihide Suga's eledest son, a senior bureaucrat and key spokesperson in Suga's administration Makiko Yamada has resigned from her post on Monday. Yamada tendered her resignation from hospital after being admitted for ill health, said government's spokesperson. 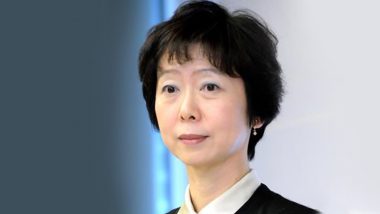 “The prime minister judged it to be unavoidable. If her health had permitted I would have liked to see her continue,” told Kato to the reporters. As per reports, Yamada along with 11 other senior government officials recently faced public disapproval and criticism after a Japaneses weekly last month reported that the PM's oldest son, Seigo Suga, had paid for an expensive dinner for them. Yoshihide Suga Elected as Prime Minister of Japan: PM Narendra Modi Congratulates New Japanese Premier on his Appointment.

Seigo Suga is an executive at a company producing television programmes for satellite broadcaster and as per the Japan’s National Civil Service Ethics Law prohibits government employees from receiving gifts or entertainment from companies or individuals that could be seen to curry favour.

(The above story first appeared on LatestLY on Mar 01, 2021 02:48 PM IST. For more news and updates on politics, world, sports, entertainment and lifestyle, log on to our website latestly.com).