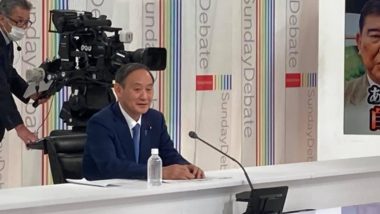 He made the speech in the Diet or Parliament as it began its regular session, which will continue through June 16, Xinhua news agency reported.

Suga vowed to tackle the surging infection cases and restore normal life "as soon as possible".

"To protect the lives and health of the Japanese people... I will get the situation back to normal as soon as possible," he said.

Earlier this month, the Prime Minister had declared a state of emergency in Tokyo and the three surrounding prefectures in a bid to stem the unabated resurgence, and has so far expanded it to seven more prefectures including Osaka and Aichi.

"What is important is to provide necessary medical services to people in need. We will exhaust all measures to safeguard the medical system," said the Japanese leader.

"We are all ready to deploy the Self-Defense Forces' medical team if requested by Governors," he added.

As of Monday, the country's overall Covid-19 infection tally and fatalities stood at 330,683 and 4,304, respectively.

In his speech, he also pledged to go ahead with preparations to hold the Tokyo Olympics this summer in the face of growing public opposition amid the resurgence.

"We will press ahead with preparations, with determination of building watertight anti-infection measures and holding an event that can bring hope and courage to the world," Suga said of the Olympics.

Rumours ran wild recently that the Tokyo Olympic Games would be postponed to 2032, immediately causing a stir among athletes who had planned to compete at the showpiece event in less than 200 days.

Both the International Olympic Committee (IOC) and Tokyo 2020 organising committee had moved swiftly to deny such accusations, dismissing all such reports concerning the cancellation of the Games as "fake news".

They reaffirmed their commitment to hosting the already-delayed Tokyo 2020 Games this summer.

While addressing the Die, Suga called South Korea "an important neighbour" when he touched on diplomacy polices, adding bilateral relations were in a very severe situation.

Earlier this month, a South Korean court ordered Japan's government to pay damages to the South Korean victims who were forced into sex slavery for the Imperial Japan's military brothels during World War II.

Japan maintained that the case should be dropped given the sovereign immunity that allows a state to be immune from civil suit in foreign courts, but the South Korean court said it cannot be applied to the case as the illegal acts were crimes against humanity committed deliberately, systematically and widely by the Imperial Japan.

"To bring relations back to an even keel, we strongly demand the South Korean side take appropriate steps," said the Japanese leader.

Suga also touched on Japan's relationship with the US, expressing hope that he will be able to meet American President-elect Joe Biden as soon as possible.

(The above story first appeared on LatestLY on Jan 18, 2021 02:37 PM IST. For more news and updates on politics, world, sports, entertainment and lifestyle, log on to our website latestly.com).