Pakistani Nobel Laureate Malala Yousafzai has called on the Taliban leadership in Afghanistan to re-open secondary schools for girls with immediate affect. She put forward this demand in an open letter addressed to the new rulers of the war-torn nation. 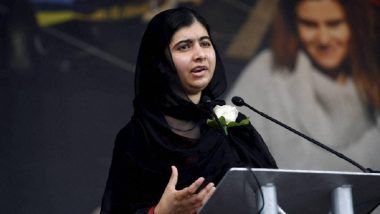 Islamabad, Oct 19: Pakistani Nobel Laureate Malala Yousafzai has called on the Taliban leadership in Afghanistan to re-open secondary schools for girls with immediate affect. She put forward this demand in an open letter addressed to the new rulers of the war-torn nation.

The Pakistani activist was shot in the head by Tehreek-e-Taliban Pakistan (TTP) militants in her hometown of Swat Valley in Khyber Pakhtunkhwa province in 2012 for being the promoter and supporter of female education.

Her open letter comes after a month since the Taliban seized power in Afghanistan. Since then, the Taliban leaders have maintained that they will be allowing girl education in the country.

However, the Taliban have allowed only boys education institutions to open and have ignored re-opening of girls' schools.

Even though the Taliban leadership promises to provide all rights to education to females in the country including education, many are unsure if this promise would be met.

Yousafzai's demand may have global recognition, and value but it is highly likely that the Taliban may simply ignore it.

The Taliban had also repeatedly threatened Yousafzai and her family and vowed to kill her when possible, accusing her for pushing females to go out of their homes for education, which they claimed was against the teachings of Islam.

The future of female education in Afghanistan remains as one of the prime matters of concerns that the world holds against the Taliban-led government set-up.

The global powers have demanded the Taliban to ensure provision of complete rights to the female including their basic human rights, freedom and education.

The Taliban may have met the global demand in commitments, but no such reflection can be witnessed on ground, as the country remains strict and rigid against allowance of females to leave their homes.

The Afghan government seeks global recognition in order to reopen financial aids to cater to its worsening catastrophic financial and economic situation.

However, the global community has maintained that no recognition can be provided until the Taliban-led government walks the talks and fulfils its commitments, which includes free access to education and basic rights to females in Afghanistan.

(The above story first appeared on LatestLY on Oct 19, 2021 04:33 PM IST. For more news and updates on politics, world, sports, entertainment and lifestyle, log on to our website latestly.com).