North Dakota Becomes 11th State to Legalise Recreational Marijuana, List of Other 10 States in US Where Cannabis is Legal

Both medicinal and recreational purposes has been regularised by law in different states and over the years the laws are changing to make cannabis legal in some parts. 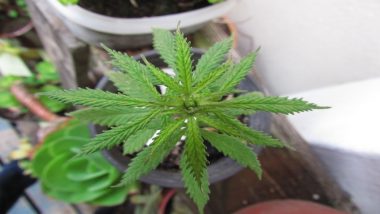 The legalisation of Marijuana in the United States is a topic of big debate. The usage of marijuana for both medicinal and recreational purposes has been regularised by law in different states and over the years the laws are changing to make cannabis legal in some parts. The use and possession of cannabis is illegal under federal law for any purpose, by way of the Controlled Substances Act of 1970. This law prohibits even the medical usage of the drug. However, the policies have changed in many states and North Dakota becomes the 11th state to legalise the recreational use of cannabis. While it was thought that New Jersey and New York might be the ones to accept the legalization, Illinois Governor Doug Burgum, a Republican has quietly signed the decriminalization bill last week. Cannabis Laws Across World: List of Countries That Legalised Marijuana in 2018.

This legislation means the first-time offenders caught possessing half an ounce or less of cannabis will be fined up to $1,000, with no jail time. The bill will also reduce penalties for possession of greater amounts of marijuana. The bill goes into effect from August 1. At present, the medicinal use of cannabis (with a doctor's recommendation) is legal in 33 states. The recreational use of cannabis is legal in 10 states as under. Oklahoma Legalises Marijuana for Medicinal Use, Becomes 30th State in US to do So.

The efforts to legalize cannabis in the US emerged from the 1970s. It began with Oregan decriminalizing in the year 1973. Washington and Colorado became the first two states to legalise in the year 2012. In the next few years, other states followed. Vermont in the year 2018 became the first to legalize through an act of state legislature. In the above list, all states allow for commercial distribution. Personal cultivation is also allowed except in the state of Washington. But at a federal level, cannabis still remains prohibited for any use.

(The above story first appeared on LatestLY on May 12, 2019 05:01 PM IST. For more news and updates on politics, world, sports, entertainment and lifestyle, log on to our website latestly.com).