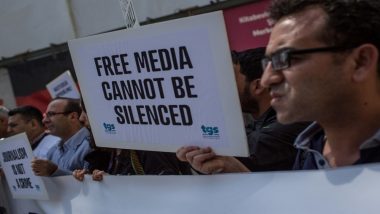 Islamabad, September 25: The Human Rights Commission of Pakistan (HRCP) lashed out at the Pakistani establishment for the recent crackdown against 49 journalists and social activists by the Federal Investigation Agency. The central probing body, according to reports that were released in the local media on Thursday, has initiated penal action against the scribes. India Slams Pakistan at UNHRC, Says 'Islamabad Violating Every International Treaty on Human Rights'.

The rights' body, in a statement issued today, said it was appalled by the action taken against journalists and social media activists. The Commission called upon the Imran Khan-led government to intervene and stop the use of FIA for silencing dissent.

"Alarmed by media reports that the Federal Investigation Agency is registering cases against 49 journalists and social media activists. We demand that the state refrain from such action and stop using the FIA to curb political dissent: Human Rights Commission of Pakistan said in a statement.

A day earlier, journalist Mubashir Zaidi had reported citing documents that top scribes including Umar Cheema, Azaz Syed, Ammar Masood and Asad Toor were booked by the FIA. Zaidi called upon the press bodies in Pakistan to launch a nationwide agitation if the cases are not dropped.

Sherry Rehman, Pakistan Peoples Party Parliamentary Leader and former Leader of Opposition in the Senate, also slammed the Imran Khan government and called the move as a "blatant attempt" to muzzle "independent voices in the media".

The Prime Minister had recently claimed that there is no crackdown on the media in Pakistan. The journalists enjoy absolute freedom to criticise the government and criticise the state's policies based upon facts, he had said.

Notably, Pakistan fares low among countries in terms of press freedom. The World Press Freedom Index 2020, prepared by Reporters Without Borders (RSF), ranked the country 145th among 180 countries that were surveyed.

(The above story first appeared on LatestLY on Sep 25, 2020 06:40 PM IST. For more news and updates on politics, world, sports, entertainment and lifestyle, log on to our website latestly.com).