International pressure is again pushing Pakistan to take action against terrorist groups and stop providing safe haven to them, according to a report by EUreporter. Some have argued that there is still a lack of political will on the part of Pakistan to deal with the issue, said the report. 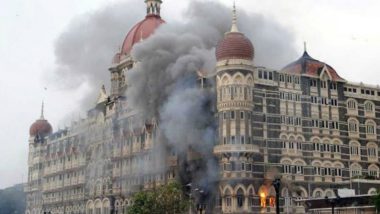 Belgium, November 26: It been 12 years since the gruesome Mumbai terror attack, Pakistan is yet to take actions against the perpetrators of the attack who are still at liberty and thereby free to plot a similar atrocity, EUreporters reported.

International pressure is again pushing Pakistan to take action against terrorist groups and stop providing safe haven to them, according to a report by EUreporter. Some have argued that there is still a lack of political will on the part of Pakistan to deal with the issue, said the report.

"...Some of those responsible for the terrible attacks are still at liberty and thereby free to plot a similar atrocity. With the anniversary of the Mumbai attacks falling today (26 November), international pressure is again pushing Pakistan to take more action against militant groups and their leaders," it said. 12 Years of 26/11 Terrorist Attack: Anupam Kher Pays Tribute to the Martyrs and Victims of Mumbai Terror Attack (View Post).

"As evidence, they point to the decision by a global "dirty money" watchdog to keep Pakistan on its "grey list" for failing to meet international anti-terrorism financing norms," it added.

On November 26, 2008, ten terrorists trained by the Pakistan-based terrorist organisation Lashkar-e-Tayyiba (LeT) carried out a series of coordinated attacks against multiple targets in Mumbai including the Taj Mahal Hotel, the Oberoi Hotel, the Leopold Cafe, the Nariman (Chabad) House, and the Chhatrapati Shivaji Terminus train station, killing 166 people.

In these gruesome attacks, nine terrorists were killed and the lone survivor, Ajmal Amir Kasab, was caught and was sentenced to death at Yerwada Central Jail in Pune in 2012. On November 11, 2012, Kasab was hanged in Yerawada Jail in Pune.

Pakistani authorities continue to deny culpability and yet to take action on the multiple dossiers shared by India. A trial underway in a Pakistani anti-terrorism court against seven suspects has made little headway in more than a decade, as Pakistani officials serially question the sufficiency and legitimacy of evidence against them.

Pakistan has been placed on the FATF's grey list of the country with inadequate controls over terrorism financing in 2018 saying Pakistan "still needs to demonstrate that law enforcement agencies are identifying and investigating the widest range of terrorism financing activity."

Pakistan has long been criticised for cultivating terror proxy groups and the country currently faces renewed pressure to act against terrorists.

There is particular concern that despite some convictions, some of those responsible for the terrible attacks are still at liberty and thereby free to plot a similar atrocity. Xiangmin Liu, president of the FATF, warned: "Pakistan needs to do more and it needs to do it faster."

Further comment comes from Denis MacShane, a former Europe minister in the UK under Tony Blair, who told this website, "It is hardly a secret that Pakistan's renowned Inter-Services Intelligence agency undertakes black operations rather like Mossad does for Israel as Pakistan have been locked in its cold, occasionally hot war with its much bigger neighbour India. A number of majority Muslim states have helped Islamist terrorist actions, most notably Saudi Arabia, whose Islamist citizens helped carry out the 9/11 attacks on Manhattan. Pakistan's nominally civilian government is helpless against the military and the ISI."

As recently as last year, a US State Department report on terrorism said Pakistan "continued to provide safe harbour to other top militant leaders."

One of the perpetrators of the Mumbai terror attacks, Sajid Mir is still roaming freely in Pakistan and no action has been taken against him despite all the evidence linking him to the gruesome attack in which 166 people were killed.

Mir served as a "handler" for David Headley and others who were directed to carry out actions relating to planning, preparing for, and carrying out terrorist attacks on behalf of LeT. Mumbai Diaries 26/11 Teaser: Amazon Prime's Medical Drama Featuring Mohit Raina Looks Bloodcurdling (Watch Video).

The sense of outrage at Pakistan's failure to fully hold to account those responsible for the attacks is summed up by Willy Fautre, the respected director of Brussels-based right NGO Human Rights Without Frontiers.

He told the EUreporter: "Ten years ago, from 26 to 29 November, over 160 people lost their lives in ten terrorist attacks perpetrated by ten Pakistanis in Mumbai. Nine of them were killed. Human Rights Without Frontiers deplores the fact that Pakistan waited until 2020 before convicting the mastermind of the Mumbai attack, Hafiz Muhammad Saeed. He was sentenced to five years and a half in prison."