The first teaser of Amazon Prime's web-series Mumbai Diaries 26/11 has released on YouTube. While the release of the web-series is still months away - March 2021 - the footage has been dropped on the anniversary of the terrorist attack on Mumbai that shook the world. 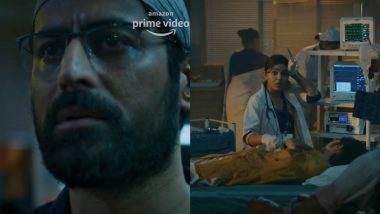 The first teaser of Amazon Prime's web-series Mumbai Diaries 26/11 has released on YouTube. While the release of the web-series is still months away - March 2021 - the footage has been dropped on the anniversary of the terrorist attack on Mumbai that shook the world. Prime's Mumbai Diaries 26/11 looks like a medical drama that will deal with what unfolded in the hospitals that unfateful night. But glimpses of police on duty, journalists on the field tell that show will explore other aspects of the attack. Mane Number 13 Trailer: Vivy Kathiresan’s Spine-Chilling Horror Drama To Premiere On Amazon Prime Video On November 26 (Watch Video).

The entire cast of the series has not been revealed, but we see Mohit Raina playing one of the leads. He is the doctor at a hospital, treating the injured. "Let's get to work," he says the only dialogue of the promo. Konkona Sen Sharma, Shreya Dhanwantary, Tina Desai also star in the show, produced by Nikhil Advani. The Family Man Season 2: Manoj Bajpayee and Samantha Akkineni’s Amazon Prime Show To Premiere In February 2021?

Talking about the show's theme, Nikkhil Advani said in a statement, "We Mumbaikars often discuss where we were on that fateful night when this devastating incident shook the entire city. There have been several shows and films centred on the incident but no one has explored the doctors’ side of it. With this medical drama, we aim to champion the human spirit in the face of unprecedented danger and celebrate the brave doctors who had saved the day while keeping the sensitivity of the topic in mind."

Aparna Purohit, Head of India Originals of Amazon Prime Video said, "The dreadful night of Mumbai terror attacks of November 26 is etched into the minds of every Indian. Mumbai Diaries 26/11 pays homage to all the frontline workers, martyrs and their families who risked their lives to save others. We are unveiling the first look of the series as an ode to their bravery and sacrifice. The show is a tribute to the spirit of Mumbai. We are extremely happy to collaborate with one of India’s finest directors, NikkhilAdvani, to present the untold stories of 26/11."

(The above story first appeared on LatestLY on Nov 26, 2020 01:33 PM IST. For more news and updates on politics, world, sports, entertainment and lifestyle, log on to our website latestly.com).