Pakistan's Opposition leader Shahbaz Sharif, who was allowed by the Lahore High Court to travel abroad for medical treatment, was on Saturday barred from flying to the UK after the country's top investigation agency allegedly placed his name on "another list", preventing him from leaving, his party spokesperson said. 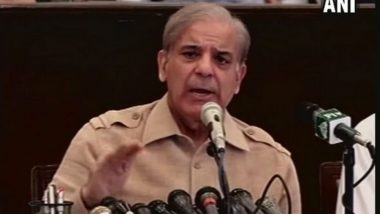 Lahore, May 8: Pakistan's Opposition leader Shahbaz Sharif, who was allowed by the Lahore High Court to travel abroad for medical treatment, was on Saturday barred from flying to the UK after the country's top investigation agency allegedly placed his name on "another list", preventing him from leaving, his party spokesperson said.

The Lahore High Court (LHC) on Friday granted Shahbaz a "conditional permission" to travel to the UK for medical treatment from May 8 to July 3. He was all set to join his "self-exiled" elder brother and former prime minister Nawaz Sharif in London.

However, Shahbaz, 69, was reportedly not allowed to fly from the Lahore airport to the United Kingdom via Qatar on Saturday morning after the Federal Investigation Authority (FIA) allegedly placed his name on "another list", preventing him from leaving the country, Pakistan Muslim League (N) (PML-N) spokesperson Marriyum Aurangzeb was quoted as saying by Dawn News.

"When Shahbaz Sharif came to the airport today, FIA officials stopped him and said he could not travel because there was another list, a 'person-not-in-list'," she said, adding that according to the FIA, the system had not been updated yet after the court order.

Aurangzeb said that two FIA officials were present in court when the LHC issued an order allowing Shahbaz to travel abroad. The court order also mentioned the flight number the PML-N president would take to fly to Qatar.

FIA immigration officials reportedly offloaded the Opposition leader from a flight to Doha after his name was found to be present on the blacklist, which prevents him from leaving the country. After being denied permission to travel, Shahbaz returned to his residence in Model Town, the Express Tribune reported.

Speaking to an immigration official at the airport, PML-N leaders informed that Shahbaz has been granted conditional permission to travel abroad for medical treatment by the LHC, to which the official responded that he was barred from leaving the country until the clearance on the immigration system is updated, the report added.

According to FIA immigration officials, his name has not yet been removed from the blacklist by the Interior Ministry.

“No clearance was issued in the system, he (Shahbaz Sharif) will be allowed to board the plane once the name is cleared,” the official maintained.

Shahbaz was scheduled to leave Lahore for Doha on Saturday morning, after which he was to leave for London after a 10-day quarantine in Qatar.

Earlier on Thursday Shahbaz had challenged the placement of his name on a travel blacklist and sought one-time permission to go abroad for medical treatment.

“I have been a cancer patient and got treated in New York and London. I could not get treatment for more than seven months as I was in jail," he said, adding in light of the medical test report conducted in jail, there was a need for immediate treatment.

The Imran Khan government reacted strongly to the court's decision to grant permission to Shahbaz to travel abroad.

Meanwhile, Information Minister Chaudhry said that the FIA director general held the authority to add or remove a person's name from the blacklist.

"Shahbaz's lawyers have not submitted any request to the DG FIA to remove (Shahbaz's name) from the blacklist as per the court's decision. The record cannot be changed on the basis of verbal talks," Chaudhry said.

On April 23, 2021, Shahbaz Sharif walked free from Lahore's Kot Lakhpat jail after about eight months behind bars in the money laundering and assets beyond means reference filed by the country's anti-graft body.

The National Accountability Bureau (NAB) had alleged that Shahbaz's family had assets of around PKR16.5 million till 1990, which increased to over PKR7 billion in 2018 which were disproportionate to his known sources of income.

Nawaz Sharif has been in London since November 2019 on "medical grounds".

The Imran Khan government has declared Sharif an absconder and cancelled his passport. Sharif left the country after the court granted him bail in the Al-Azizia Mills corruption case in which he was undergoing seven years imprisonment in Kot Lakhpat jail Lahore.

He was also granted four-week bail on medical grounds to have his treatment abroad. The government declared him an absconder after he failed to justify prolonging his stay in London.