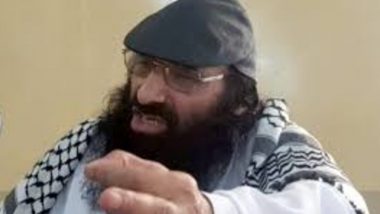 New Delhi, September 6: A document issued by the Pakistan government "certifying" terror outfit Hizbul Mujahideen chief Syed Salahuddin as "bona fide official" who is "working with ISI" has got into hands of the Indian security establishment, according to a report. The document "certifying" Syed Muhammad Yousaf Shah alias Syed Salahuddin was issued by the Directorate of Intelligence, Islamabad. NIA Calls For Public Help to Locate Fugitives, List of 'Most Wanted' Includes Zakir Naik, Hafiz Saeed, Syed Salahuddin.

According to TOI, the Pakistani document states that "it is certified that Syed Muhammad Yousaf Shah, Ameer Hizbul Mujahideen, is working with Inter Services Intelligence (ISI), Islamabad. He is bona fide official of this department". It was addressed to director/commanding officer Wajahat Ali Khan. The document also said that Salahuddin has security clearances and should not be stopped unnecessarily. Hizbul Mujahideen on Verge of Complete Wipeout From South Kashmir, Says J&K DGP Dilbag Singh.

The validity of "certificate" on Salahuddin is up to December 31, 2020. In addition to overseeing operations of Hizbul Mujahideen, Salahuddin heads United Jihad Council (UJC), an umbrella body of terror outfits including the UNSC-proscribed Lasker-e-Taiba and Jaish-e-Mohammad. The document would help India strengthen the case for moving Pakistan to the Financial Action Task Force (FATF) 'blacklist'.

Pakistan has been on FATF's grey list since June 2018 for failing to implement and comply with the 27-point action plan that it was handed over by the Asia Pacific Group (APG) and the FATF. It won a three-month further extension to complete its 27-point action plan because of the coronavirus pandemic. The joint group is expected to meet in September to review Pakistan's case before it is placed in front of the FATF plenary, which likely to take place in October.

(The above story first appeared on LatestLY on Sep 06, 2020 08:30 AM IST. For more news and updates on politics, world, sports, entertainment and lifestyle, log on to our website latestly.com).