The U.S. along with its allies UK and France have attacked chemical weapons facilities in Syria's capital region. 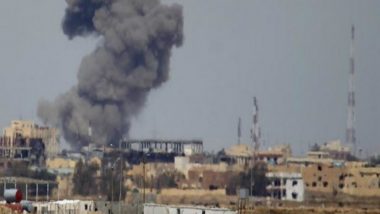 A day after the U.S. government said that it had evidence that the chemical attack launched on the town of Douma earlier this month was carried out by the Syrian regime, the U.S. along with its allies UK and France have attacked chemical weapons facilities in the country's capital region. This 70-minute offensive is the biggest attack against Bashar Al-Assad by Western governments till date.

"A combined operation with the armed forces of France and the United Kingdom is now underway," President Donald Trump said in an address to the nation.

"A short time ago, I ordered the United States armed forces to launch precision strikes on targets associated with the chemical weapons capabilities of Syrian dictator Bashar al-Assad," Trump said in a primetime televised address to the nation.

"A combined operation with the armed forces of France and the United Kingdom is now under way. We thank them both. This massacre was a significant escalation in a pattern of chemical weapons use by that very terrible regime, " said Trump announcing the offensive after a week of speculation whether U.S. would target Syria after it crossed the 'Red line' of a chemical attack on its civilian population.

Officials at a Pentagon briefing listed three targets that had been struck:

French President Emmanuel Macron said he had ordered the strikes on Syria because "dozens of men, women and children were massacred with chemical weapons".

"The red line had been crossed," he added.

What Weapons were used in the attack?

CNN reports that both ships and aircrafts were used by U.S. and its allies to bombs Syria targets. Atleast one U.S. war ship in the Red Sea and B-1 bombers were used in the attack. Analysts say Tomahawk missiles were the weapons of choice for the U.S.

The UK Ministry of Defence (MoD) said four RAF Tornado jets were deployed to launch missiles at a Syrian military facility. The former missile base was assessed to have been used by the Syrian regime to "keep chemical weapon precursors stockpiled in breach of Syria's obligations under the Chemical Weapons Convention", the MoD said in a statement.

French government has tweeted a video which shows its Rafale fighter jets loaded with Storm trooper air-to-surface missiles taking off for the attack.

Syrians say that they have managed to shoot down many of these missiles through their air defence system which had been activated after U.S. government had warned off consequences to  the Douma chemical attack.

Russian ambassador to U.S. warns of "consequences" after strikes on Syria

Anatoly Antonov, Russian ambassador to the US, issued a statement on Facebook in response to the strikes on Syria.

He accused the West of carrying out a "pre-designed scenario." He said there would be "consequences," and the responsibility for them lies with Washington, London and Paris.

Antonov added: "Insulting the President of Russia is unacceptable and inadmissible," and said that the US "has no moral right to blame other countries" since it possesses a large arsenal of chemical weapons of its own.

The U.S. government says that this is a one-time attack and  a message to Assad that his actions will have consequences.

(The above story first appeared on LatestLY on Apr 14, 2018 08:13 AM IST. For more news and updates on politics, world, sports, entertainment and lifestyle, log on to our website latestly.com).